Spot power prices were dictated by the carbon market yesterday as December-14 contracts fell significantly. Today the market is expected to display a more stable outlook although further downward movement cannot be ruled out. Gas prices also moved down despite a reduction in flows via Norway due to an outage at a processing facility; low demand was the main driver of the market yesterday. Further bearish movement could be made this afternoon as healthy storage levels and continued low demand weigh on prices. Today's prices can also be found in an easy to read table on our 'current UK energy price' page

Day-Ahead gas fell by 0.60ppt as the majority of contracts recorded a loss on both the near and far-curve. Linepack was long for the majority of yesterday's trading session but became more balanced in the evening. An outage at a Norwegian processing plant failed to offer any support to contracts and the situation in Ukraine is currently stable. On the power curve Day-ahead was the only contract to move higher due to weaker wind generation today. The rest of the curve took direction from falling gas and carbon contracts as Front-Month fell by £0.30/MWh and Winter-14 closed £0.40/MWh lower.

Gas prices opened the session at a discount with June-14 decreasing the most, registering a 0.70ppt loss. Day-Ahead shed 0.45ppt from its prices despite Langeled flows falling below 50mcm due to yesterday's outage. Contracts are currently influenced by low demand and above average temperatures with storage levels above 52%. Day-Ahead power recorded a £3.50/MWh loss this morning as wind generation is expected to ramp up to high levels tomorrow. The rest of the curve also moved down however these losses were much smaller than the ones displayed by prompt.

Market close data has revealed that the 1-year forward price for both commercial gas & commercial electricity decreased - closing at 62.00ppt and £49.65/MWh, respectively. This can be seen in the graph below. 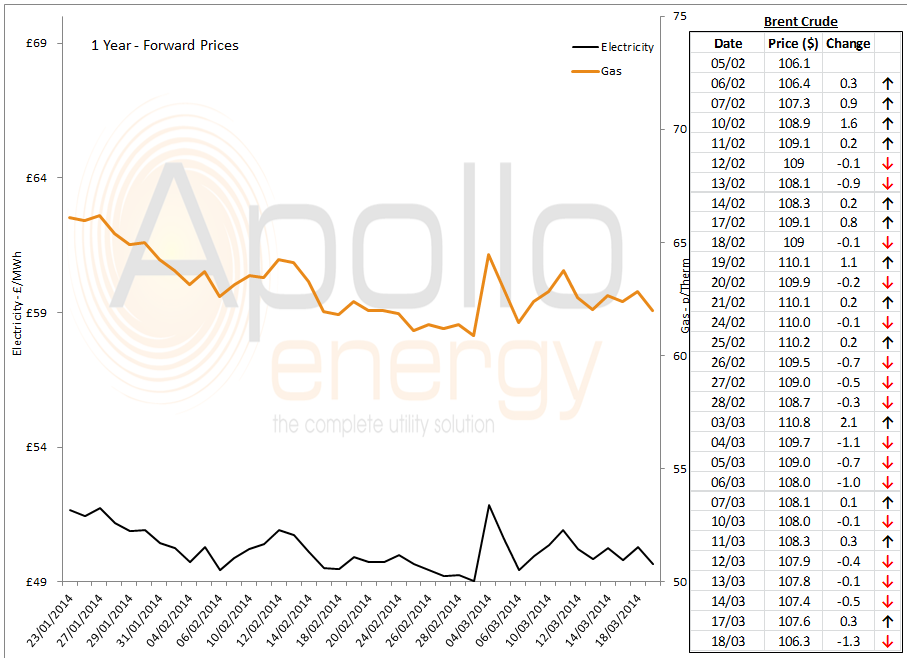