Spot power prices recorded gains yesterday morning following a downward revision in temperatures for this week which should result in a rise in consumption. Today, weaker gas is the main driver of the power market and the majority of contracts have moved down. Gas prices opened yesterday's session higher but decreased as the day progressed with influence coming from weaker Brent. Supply levels remain healthy this morning as demand is 10mcm lower today, resulting in numerous losses. Today's prices can also be found in an easy to read table on our 'current UK energy price' page.

Gas prices weakened by the end of yesterday's session despite opening at a premium on the back of a colder weather forecast. Bearish pressure came from improved supply levels as an increase in flows from Belgium countered a rise in demand. Power prices followed a similar trend of opening higher but falling throughout the session, although a weaker wind generation forecast supported the prompt. Elsewhere, seasonal contracts displayed little movement despite weakening fuel prices.

Gas prices continued to weaken this morning with warmer weather expected to return at the weekend. An additional LNG delivery is also expected to arrive in the UK next week, meaning LNG imports during March are at their highest level since 2011. Power prices followed gas closely with weaker Brent and coal weighing on contracts on the far-curve and a warmer weather forecast resulting in losses on the near-curve. The day-ahead contract also recorded a loss of over $2.50/b with an expected drop in demand and improved wind production the main contributors.

Market close data has revealed that the 1-year forward price for both commercial gas & commercial electricity decreased - closing at 46.55ppt and £43.70/MWh, respectively. This can be seen in the graph below. 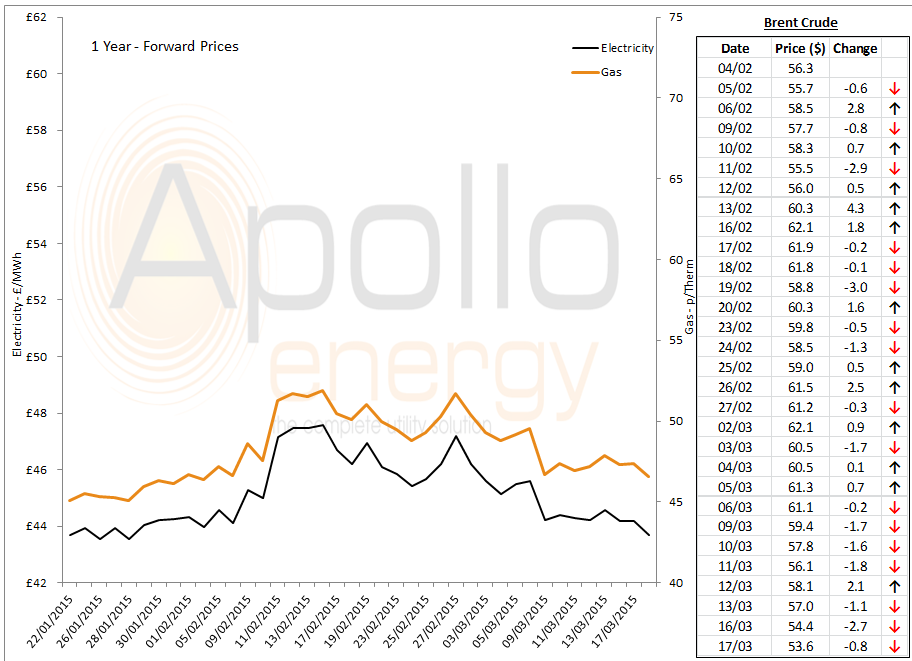