Spot power prices were supported this morning on the back of stronger gas, although the upward movement was restricted by an expected drop in demand over the weekend with warmer weather set to return. Overall supply levels were healthy yesterday and demand levels were slightly down which resulted in losses across the gas curve. The temporary shutdown of a gas field in Norway has pushed prices higher this morning as the UK gas system opened short; however the outlook for this afternoon is thought to be bearish. Today's prices can also be found in an easy to read table on our 'current UK energy price' page.

A revised weather forecast helped most near-curve contracts record a small loss yesterday although overall movement was quite subdued. Gas flows were slightly down compared to Monday but supply remained comfortable, with further LNG deliveries expected. Most power contract displayed a slight rebound yesterday although seasonal contracts showed very little movement either way. Meanwhile, Day-Ahead power recorded a loss as wind generation was expected to rise to around 275MW.

Upward movement was observed on the gas curve this morning on the back of a short UK gas system following supply issues. A gas field in Norway has been shut down temporarily, while a technical issue at the UK's Bacton facility could reduce stocks. Rising gas prices pushed contracts on the power curve higher this morning although movement further along the curve was less prominent due to weak oil prices. The prompt contract displayed no change as consumption and wind generation levels are expected to remain steady tomorrow.

Market close data has revealed that the 1-year forward price for both commercial gas & commercial electricity increased - closing at 47.55ppt and £44.05/MWh, respectively. This can be seen in the graph below. 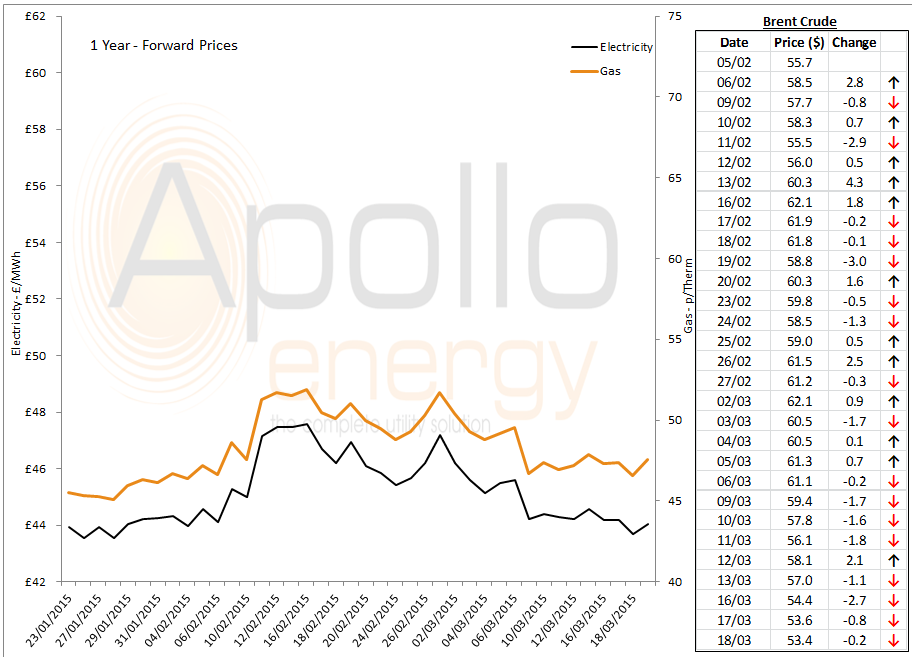