Spot power prices could display some upward movement in the next couple of days as wind production is expected to remain low and temperatures should stay above average. Gas prices strengthened towards the end of last week as supply issues in Eastern Europe continued. Today UK LDZ demand is 15mcm lower while temperatures across Europe are expected to be above average; prices should move down as a result. Today's prices can also be found in an easy to read table on our 'current UK energy price' page.

Losses were observed across the gas curve on Thursday with contracts falling by 1ppt on average. Front-Month was the biggest mover and shed 1.45ppt from its price, while Day-Ahead dropped by 1.10ppt due to the lower demand forecast over the Easter weekend. Seasonal contracts also moved down but the losses were less prominent than those seen on the near-curve; price-drops ranged between 0.20ppt and 1.05ppt. Power prices followed a similar trend to gas although Day-Ahead was the exception to the bearish movement as the contract climbed £0.10/MWh higher due to a drop in wind production. Losses further along the curve ranged between £0.10/MWh for Summer-16 to £0.85/MWh for June-14.

Day-Ahead gas was the only contract to move higher this morning and added 0.70ppt to its price. Meanwhile, Front-Month fell by 0.05ppt and June-14 decreased by 0.15ppt as reduced demand and healthy supply levels offered downward pressure. On the power curve Day-Ahead opened £0.60/MWh lower while Front-Month fell by £0.10/MWh. Further out, contracts took direction from their gas counterparts with Summer-15 increasing by £0.40/MWh.

Market close data has revealed that the 1-year forward price for both commercial gas & commercial electricity decreased - closing at 60.50ppt and £51.20/MWh,respectively. This can be seen in the graph below. 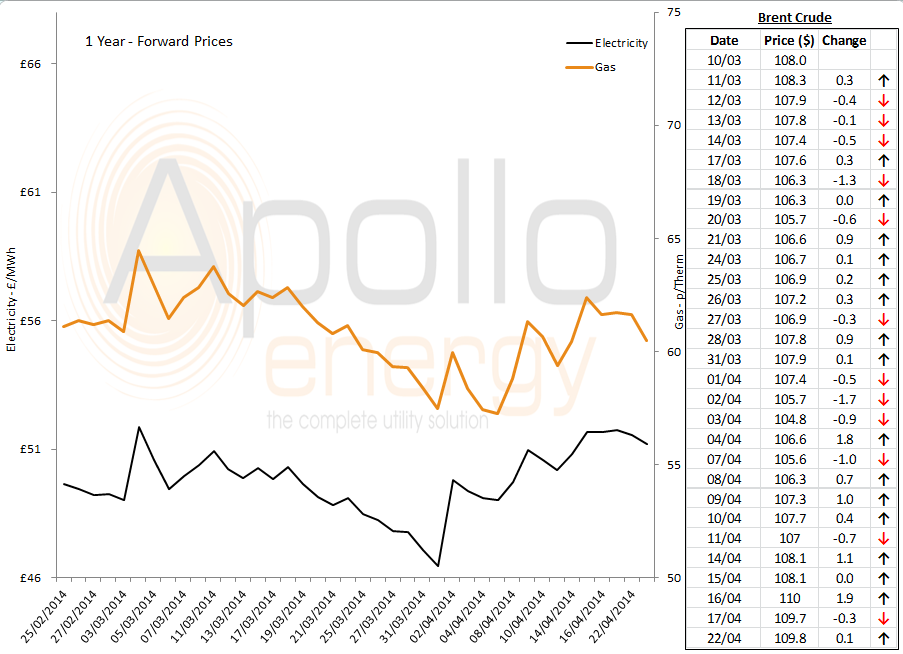 Brent 1st-nearby prices have maintained their high levels and are close to the $110/b mark this morning, with influence coming from the on-going tensions in Ukraine.