Spot prices remained firm over the weekend as temperatures improved but production was lower due to numerous power plants under-going maintenance. European Renewable generation saw little change but should improve as the week goes on.

Day-Ahead gas took a bearish direction on Friday and fell by 0.55ppt as a result of warmer weather. Further along the curve most contracts remained unchanged while the near curve saw most contracts make gains before dropping again at the close of the session. South Hook's output was around 50mcm which led to strong LNG flows with the system remaining long for most of the day. LNG flows are expected to rise further as the week goes on with two deliveries set to arrive in the next few days. Day-Ahead struggled to take any real direction as falling gas prices were counteracted by a number of power plants currently receiving maintenance, closing £0.05/MWh down at the end of Friday's session. A 1,100Mw power plant in Scotland is currently running at less than 40% of its normal output and a number of plants have been taken offline completely including a 550MW reactor in Kent. A few seasonal contracts made losses with Winter-13 closing £0.20/MWh down.

The majority of gas contracts made gains at opening with Day-Ahead rising by 1.35ppt and Front-Month going up by 0.55ppt. The Bacton BBL interconnector, Langeled and The South Hook terminal saw a reduction in flows which was the main contributor to the price rise despite improved temperatures. Brent Crude also made a $0.76/bbl rise due to optimistic economic news in the US which also added to the gains made by the gas curve. Front-Month power opened at a £0.30/MWh discount and Day-Ahead shed £0.50/MWh as spot carbon prices dropped. The rest of the curve followed a similar direction to gas however, except for Q4-13 which fell by £0.40/MWh.

Market close data has revealed that the 1-year forward price for commercial gas & commercial electricity both made gains - closing at 67.80ppt and £51.98/MWh, respectively. This can be seen in the graph below. 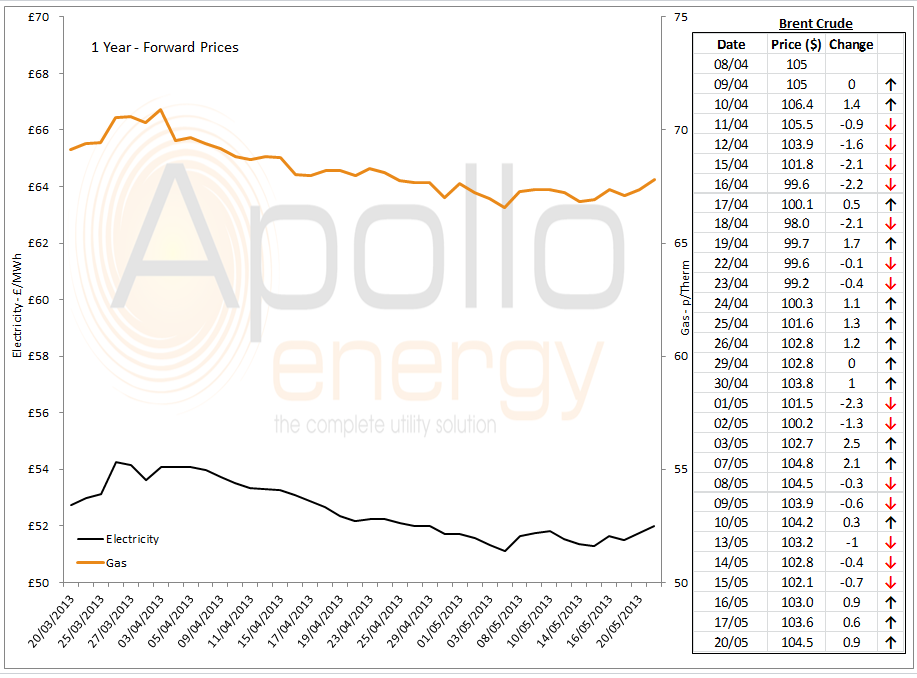 Positive economic data and an increase in demand in the US led to the Brent Crude price making a gain and opened up today at $104.5./bbl.