Spot prices made gains yesterday as a drop in renewable production has been forecast for today although wind and solar generation could improve in the afternoon. In terms of gas, temperatures are expected to improve slightly today but will remain below average levels. Higher demand has been countered by improved Norwegian flows and October-13 prices are expected to make small losses. Today's prices can also be found in an easy to read table on our 'current UK energy price' page.

Day-Ahead gas added 0.25ppt to its price as Langeled flows dropped to around 35mcm while Front-Month lost 0.40ppt as storage levels remained at 85%. Further along the curve prices also displayed a bearish outlook as contracts took direction from weaker Brent. On the power curve Day-Ahead closed at a £1.10/MWh premium due to the drop in wind production and the cooler weather. The weaker wider fuels complex led to contracts on the far curve making a loss while carbon allowance prices hit a 9-month high.

Prompt gas prices turned bearish following an improvement in Langeled flows which stood at 54mcm this morning, as a result of this improvement Day-Ahead lost 0.05ppt. The current Front-Quarter and Front-Season contracts will expire at the end of the month and both made strong gains today on the back of extended maintenance at a Gasco facility. Both Front-Month and Front-Quarter power made strong gains similar to gas this morning and took influence from stronger carbon allowances. Day-Ahead went up by £0.10/MWh despite the decline in nuclear supply availability and instead took direction from an increase in demand.

Market close data has revealed that the 1-year forward price for commercial gas fell slightly while commercial electricity made a gain - closing at 66.53ppt and £51.88/MWh, respectively. This can be seen in the graph below. 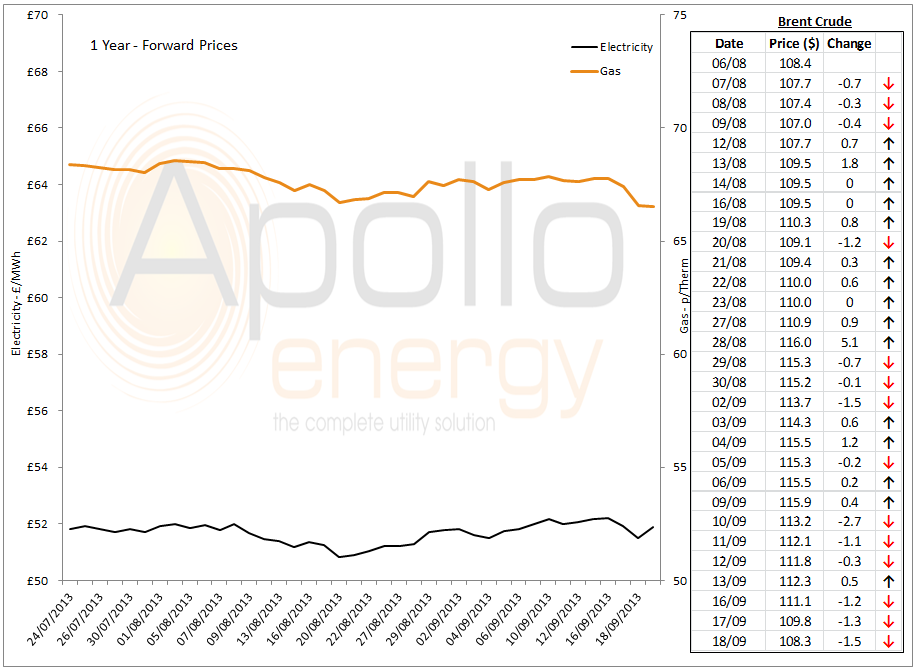 Brent 1st-nearby prices decreased by $1.88/b yesterday falling below $108/b and continued to trade around that price this morning. The positive supply data coming out of Libya and the short term solution in Syria has helped prices to move down.