Spot prices increased slightly yesterday and took influence from a fall in wind generation; calendar-2014 prices showed very little movement but could rise over the weekend. Norwegian supply saw a significant decrease yesterday which tightened the UK gas system, resulting in an extra reliance in storage withdrawals to balance the system. UK LDZ demand is expected to be 6mcm lower than yesterday and it is hoped Norwegian supply levels will also improve which should lead to bearish November-13 prices. Today's prices can also be found in an easy to read table on our 'current UK energy price' page.

The UK gas system reached 15mcm long thanks to an increase in storage withdrawals which helped most contracts along the curve make a loss. Day-Ahead fell by 0.25ppt and weaker Brent had an effect on far-curve contracts, lower Chinese demand last month was one of the main drivers of oil prices. The power curve followed a similar trend to gas with only Day-Ahead showing any upward movement, rising by £0.15/MWh. The system buy price peaked at £102/MWh later in the session while two nuclear units will be taken offline over the weekend including one at Hinkley.

Linepack was almost balanced at the start of today's session as improved flows through the BBL pipeline countered reduced flows via Langeled. The reduction in flows at the Langeled pipeline came as normal service was resumed at the Franpipe which has been closed for maintenance this week. Day-Ahead power fell by over £2.40/MWh as high levels of wind availability are predicted over the weekend which should offset the temporary closures of power plants. Losses seen on the rest of the curve were less prominent and some seasonal contracts saw no change.

Market close data has revealed that the 1-year forward price for both commercial gas & commercial electricity made a loss - closing at 66.50ppt and £52.25/MWh, respectively. This can be seen in the graph below. 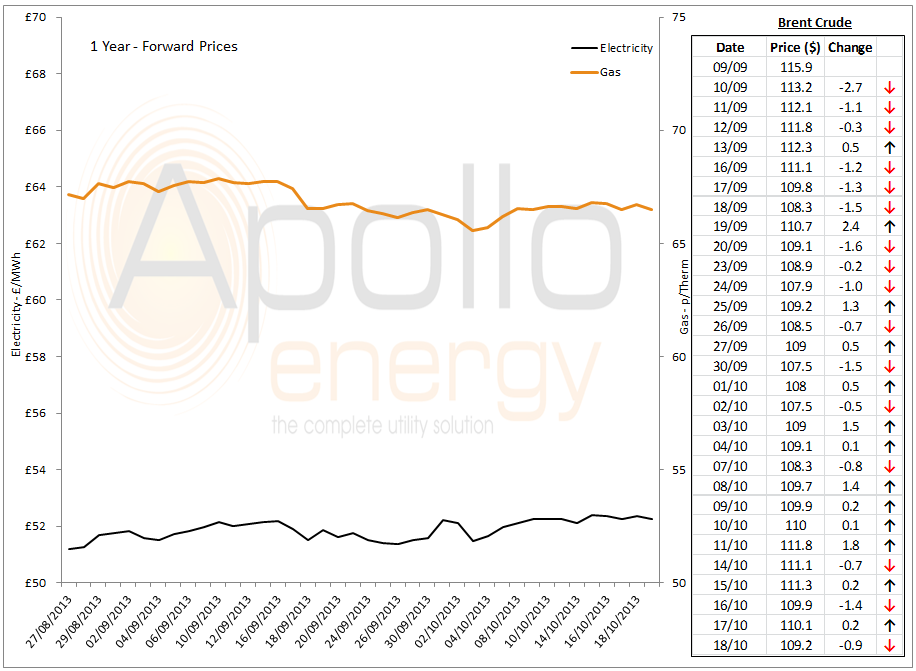 Brent 1st-nearby prices fell by $1.75/b yesterday as the market is starting to feel the effect of the end of the US shutdown. Brent dropped below $109/b but is expected to rebound today following the release of positive Chinese data.