Spot power prices are on the decline this morning as wind generation levels are expected to ramp up. Healthy renewable generation should lead to further losses, helped by below average demand. Gas prices moved down on Friday as mild weather over the weekend resulted in low demand. The UK gas system is well-supplied this morning despite lower Langeled flows and this should lead to a further decrease this afternoon. Today's prices can also be found in an easy to read table on our 'current UK energy price' page.

The gas curve ended Friday's session with numerous losses, with direction coming from a mild weather forecast for the weekend. Overall gas flows were also improved and news of imminent LNG deliveries helped to weigh on far-curve contracts. Power prices moved down on Friday and took influence from their gas counterparts and a forecast of higher wind. Strengthening oil failed to have much impact further along the curve and most contracts weakened on the back of an improved supply outlook.

Day-ahead gas recorded a loss of over 1ppt this morning due to a UK gas system which opened 24mcm long. Strengthening Brent failed to have any effect on prices and most contracts opened at a discount due to the healthy supply/ demand picture. Front-Month moved down as two LNG deliveries are expected to arrive in the UK this month, while November-14 also shed around 1ppt from its price. On the power curve Day-Ahead fell to £43/MWh as wind generation levels are expected to reach a peak of 6.5GW tomorrow. The prompt contract was unaffected by a fire at the Didcot B gas-fired plant over the weekend.

Market close data has revealed that the 1-year forward price for both commercial gas & commercial electricity decreased- closing at 56.00ppt and £50.75/MWh, respectively. This can be seen in the graph below. 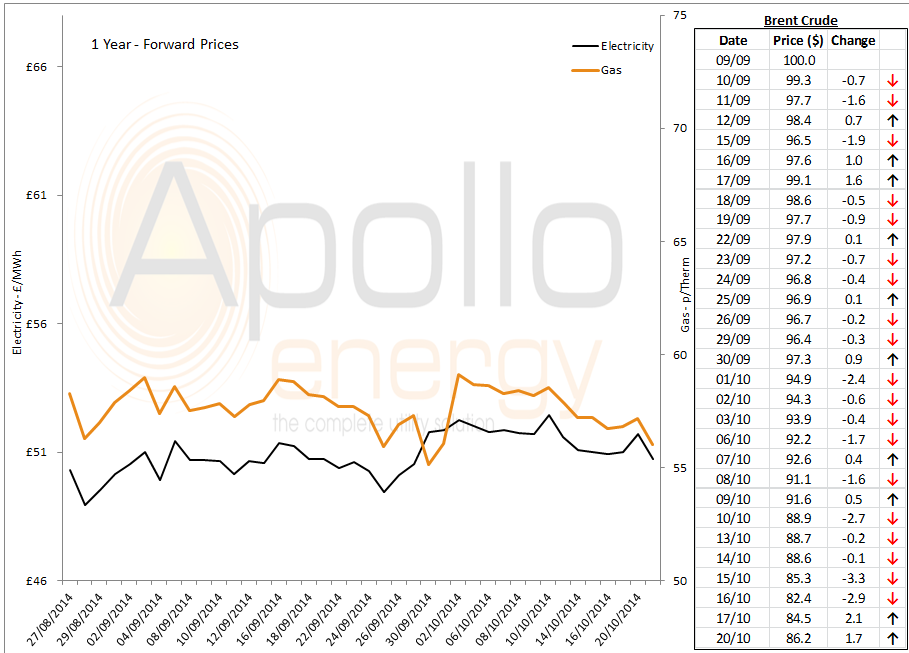 Brent 1st-nearby prices rebounded on Friday and have settled just above $86/b this morning. News in regards to the positive economic data coming out of the US has helped oil prices to strengthen.