Spot power prices initially opened higher yesterday but another revision in temperatures helped the bears seize control as an expected colder stint is likely to be avoided. Today, rising carbon contracts were countered by the low demand forecast and the majority of prices opened unchanged. However, some upward movement cannot be ruled out this afternoon. Gas prices took direction from an expected rise in demand over the weekend and a drop in overall production yesterday. The revision in temperatures has helped to weigh on gas contracts this morning and healthier supply should result in further losses. Today's prices can also be found in an easy to read table on our 'current UK energy price' page.

Gas prices moved higher on Monday due to restrictions on overall gas supply in the North Sea. Meanwhile, prices further along the curve received support from a colder weather forecast for the UK and Europe as well as a weakening British Pound. Power prices displayed a similar trend to gas with an expected rise in demand resulting in numerous gains across the curve. Stronger Brent and carbon led to some upward movement on the far-curve in a generally bullish day of trading.

An increase in overall gas flows by around 8mcm has helped the UK gas system open 22mcm long, with South Hook send-outs rising from 26mcm to 40mcm. The majority of gas contracts have opened at a discount on the back of this healthy supply picture. A further revision in temperatures shows that the mild weather is set to continue for a little while longer and has helped the majority of power contracts to open unchanged. Day-Ahead was the only contract to display a large gain as it added £1/MWh on the back of low wind production. Elsewhere, some far-curve contracts recorded small gains due to an increase in coal and carbon contracts.

Market close data has revealed that the 1-year forward price for commercial gas increased slightly while commercial electricity kept its price - closing at 55.75ppt and £50.28/MWh, respectively. This can be seen in the graph below. 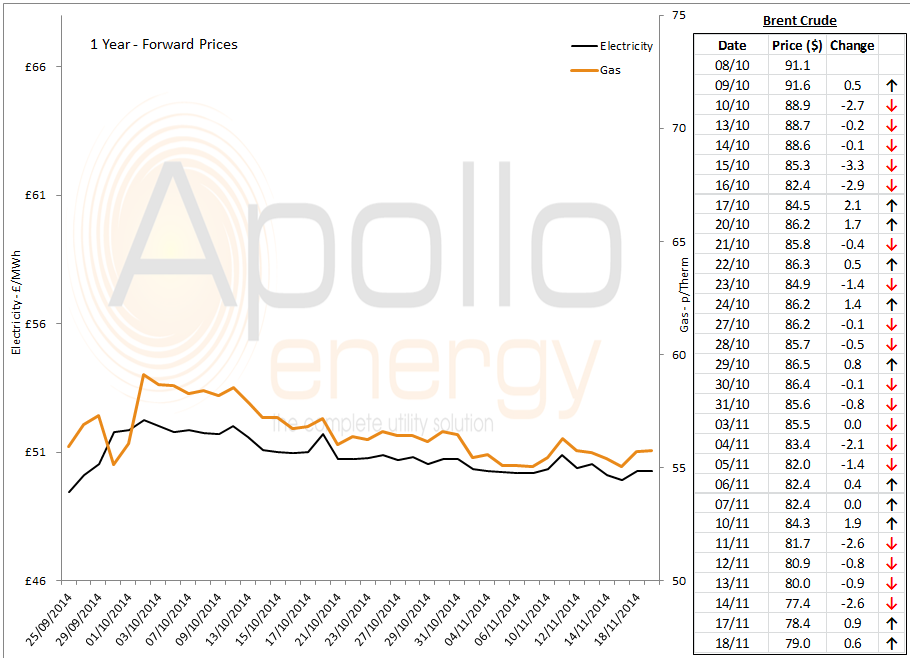 Brent 1st-nearby prices moved down yesterday but rebounded this morning following news from the European Parliament which has increased the risk premium of global oil supplies; Brent currently trades at around $79/b.