Mild weather for this time of year helped to lower demand levels yesterday which led to spot power prices closing at a discount. Wind generation has improved today and has helped to offset the effect of outages at power plants; further downward movement is likely. Despite significant gas cuts in Holland, gas prices moved down yesterday as overall supply levels were healthy. Demand levels in the UK are expected to be 20% below the seasonal norm today and the UK gas system has opened long which should lead to further losses. Today's prices can also be found in an easy to read table on our 'current UK energy price' page.

Significant losses were evident at the end of yesterday's session with Day-Ahead falling by 0.80ppt and Front-Month displaying a 0.75ppt price-drop. Milder weather resulting in weaker demand helped to weigh on the majority of contracts, ending this week's bullish trend. Power prices shed from their price yesterday and followed weaker gas with further influence from the current above average temperatures. Further along the curve some contracts moved higher as cold weather at the start of 2015 is expected to lead to high demand.

Gas contracts rebounded this morning despite a UK gas system which opened 25mcm long and demand levels which were 14mcm lower than this time last week. Day-Ahead opened 0.05ppt lower and has fallen below 53ppt for this first time since November. Day-Ahead power was £1/MWh lower this morning with influence coming from the usual drop in demand on Fridays and high levels of wind generation. The rest of the curve posted smaller gains with only a few contracts moving in the opposite direction.

Market close data has revealed that the 1-year forward price for both commercial gas & commercial electricity decreased - closing at 53.50ppt and £49.23/MWh, respectively. This can be seen in the graph below. 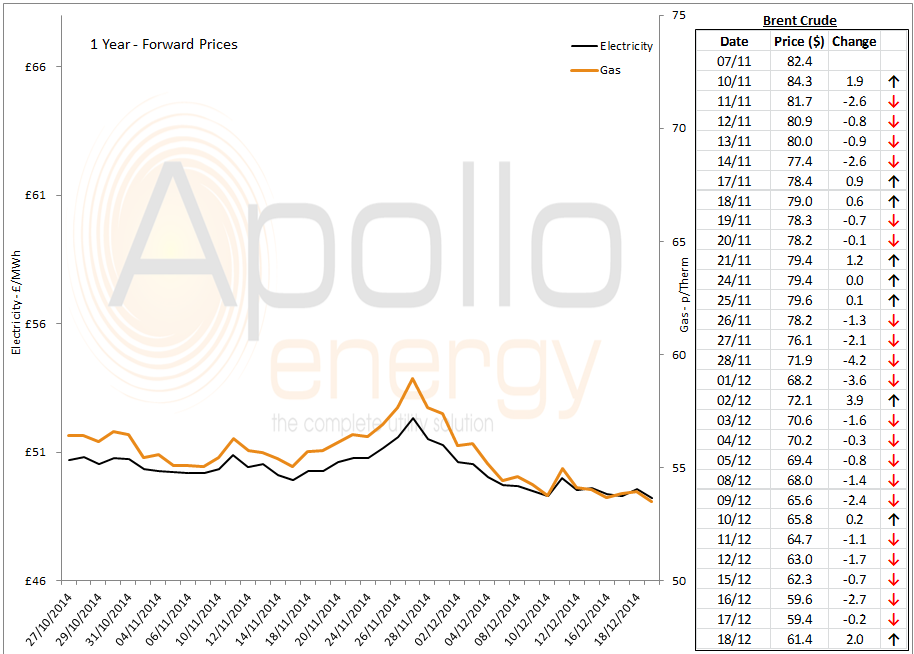 Brent 1st-nearby prices recorded gains for the first time in seven days and now trades above $61/b. The upward movement was a result of the recent EIA stocks report and upstream investment cuts by numerous oil companies.