Spot power prices decreased yesterday as the production forecast for renewables such as wind and hydro were healthy for today, while thermal availability was also ample. Colder temperatures are expected at the start of next week and coal prices have also strengthened so some upward movement could be expected. Gas prices continued to fall due to low demand levels and comfortable supply; this was despite a short UK gas system following a drop in BBL flows due to an outage. UK LDZ demand has fallen by 13mcm today and is 21.9% below the seasonal average although colder temperatures by the end of the week should lead to a temporary rise. Prices are expected to drop further this afternoon as fundamentals remain healthy. Today's prices can also be found in an easy to read table on our 'current UK energy price' page

Gas contracts showed very little movement at the start of yesterday's trading session but posted small gains later in the afternoon. These gains ranged from 0.10ppt for Q3-14 to 0.30ppt for Front-Month. Meanwhile, Day-Ahead fell by 0.15ppt as a rise in UK temperatures was forecast for today. Langeled flows were less than 60mcm which led to a short UK gas system, while a colder weather forecast for the weekend offered additional support. Increased wind generation helped to weigh on power prices yesterday as Day-Ahead recorded a £0.25/MWh loss. The rest of the curve showed mixed movement although any upward movement was minimal, weaker carbon contracts also provided some downward pressure.

Gas prices moved down this morning as Linepack opened the session 20mcm long following improved flows via Langeled. Contracts on the far-curve recorded the more significant losses as Day-Ahead fell by just 0.30ppt and Summer-14 opened at a 0.70ppt discount. Movement was varied on the power curve as seasonal contracts climbed higher with Summer-15 increasing by £0.15/MWh and Winter-15 rose by £0.30/MWh. In contrast Day-Ahead fell by £0.95/MWh on the back of healthy wind generation.

Market close data has revealed that the 1-year forward price for both commercial gas & commercial electricity decreased - closing at 61.30ppt and £49.13/MWh, respectively. This can be seen in the graph below. 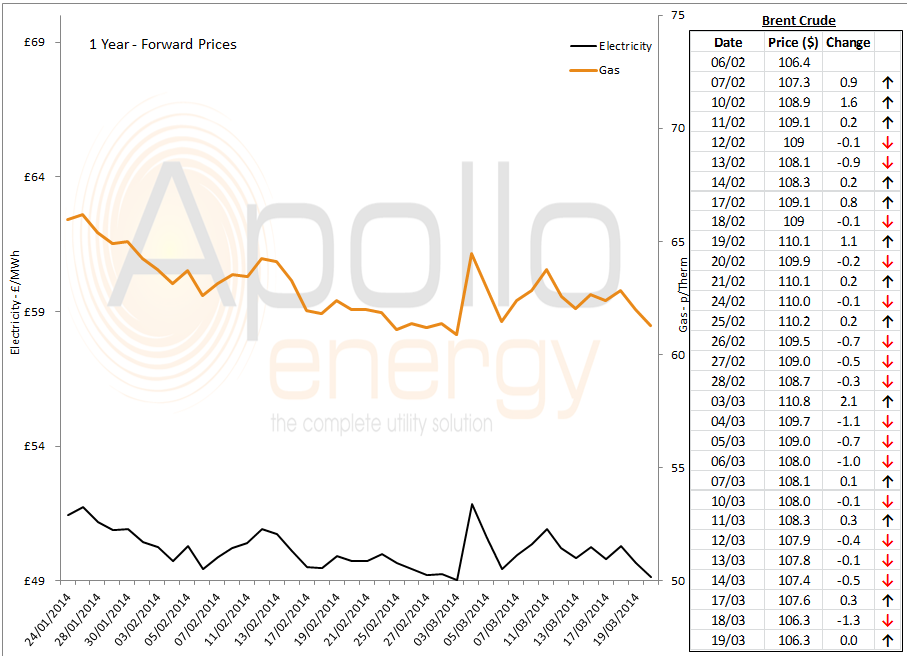 Brent 1st-nearby prices remained around $106/b yesterday which was a new six-week low, although a slight rebound occurred in the afternoon as prices displayed a $0.55/b gain. WTI rose by $1.62/b which has taken the Brent/ WTI spread to -$8.2/b. The situation in Ukraine is having no bearing on prices at present as tensions have eased somewhat; the US Federal Reserve and Stock levels are instead the current market driver.