Spot power prices have climbed higher this morning as nuclear generation on the continent is set to fall over the coming days. A 215MW hydro power plant in Belgium will also go offline next week, while wind production in the UK is expected to fall tomorrow. Gas prices moved higher yesterday as a fault at Centrica's Rough facility could result in a drop in storage levels. Prices moved down this morning on the back of healthy supply but concerns regarding UK storage could push contracts higher in the afternoon. Today's prices can also be found in an easy to read table on our 'current UK energy price' page.

Price increases were displayed across the gas curve yesterday on the back of potential storage concerns as a fault was found at the UK's largest storage facility. A slight increase in demand was also expected today, while Brent was also on the rise. Power contracts followed their gas counterparts and moved higher, although the day-ahead contract added just £0.05/MWh to its price as stronger wind generation countered comfortable supply. The gains were much more prominent on the far-curve with Winter-15 & 16 climbing £0.75/MWh higher and Summer-16 increasing by £0.45/MWh.

Gas prices were generally bullish this morning as strong supply was the main market driver. However, prices on the far-curve were supported by stronger Brent and potential storage concerns could result in upward movement later in the day. Power prices increased this morning as wind, nuclear and hydro generation is set to fall in the coming days. The gains were more noticeable on the far-curve with extra support coming from rising Brent.

Market close data has revealed that the 1-year forward price for commercial gas recorded a small loss while commercial electricity increased - closing at 47.40ppt and £44.38/MWh, respectively. This can be seen in the graph below. 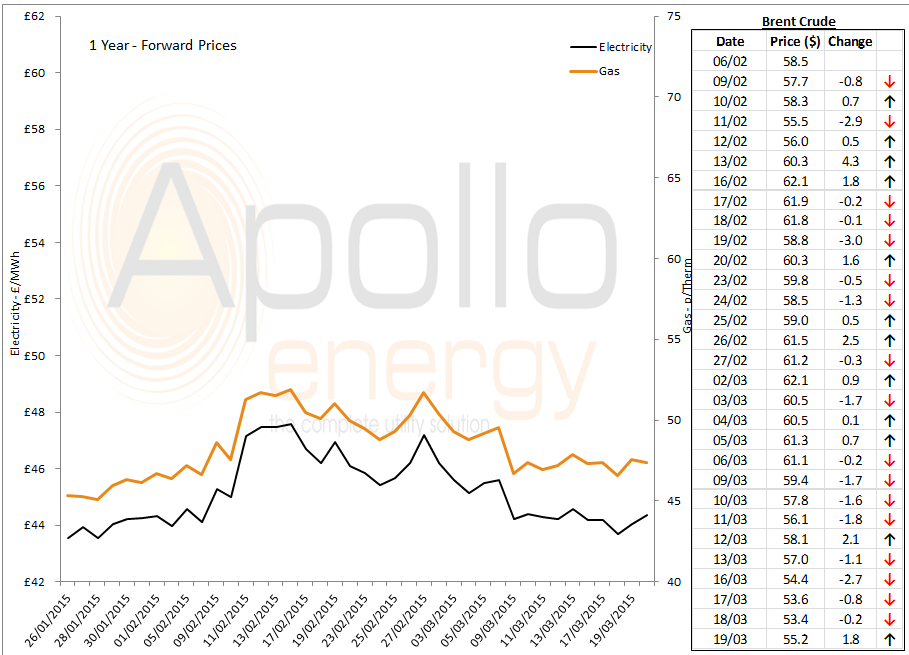 Brent 1st-nearby prices increased by around $1.80/b overnight, currently trading at $55.19/b; with influence coming from a weaker US Dollar.