The market is currently well-supplied and is expected to remain that way in the next few days while consumption levels are also lower. Near-term prices made losses as a result of the weak spot market over the weekend while CO2 prices were strong at the start of the session.

Gas contract prices reduced as the system was well-supplied for the majority of yesterday's session and strong Brent prices were ignored. Front-Month and Front-Quarter contracts made the biggest losses which ranged between 0.70ppt and 1.05ppt. Day-Ahead also dropped slightly and made a loss of 0.15ppt as healthy supply was countered by a number of sites going offline. Further along the curve, seasonal contracts made losses ranging between 0.40ppt and 0.70ppt. The power curve also saw losses except Day-Ahead which gained £0.60/MWh while August-13 registered the largest price drop of £1.25/MWh. The price increase for Day-Ahead was a result of reduced wind production at peak times on Monday.

Day-Ahead gas made a loss of 1.30ppt while Front-Month dropped 0.05ppt due to an increase in gas flows from the Langeled pipeline which have gone from 20mcm a day to 37mcm a day. LNG flows increased by 11mcm a day which also helped the gas market to take a bearish turn with quarterly contracts making losses of up to 0.20ppt. The power curve displayed no real trend as Day-Ahead fell by £0.60/MWh influenced by falling Brent, carbon and APi2 coal prices. Numerous outages at power plants led to July-13 and September-13 contracts opening unchanged despite weaker Brent prices.

Market close data has revealed that the 1-year forward price for both commercial gas & commercial electricity made a loss - closing at 68.60ppt and £52.18/MWh, respectively. This can be seen in the graph below. 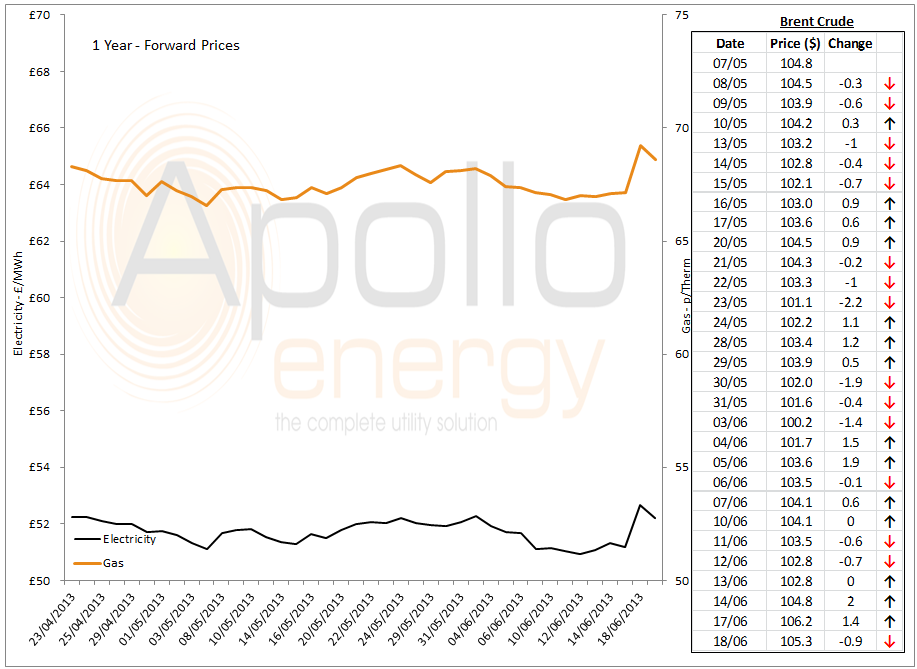 Brent 1st nearby prices fell from to 105.5 $/b with weaker US gasoline markets having an effect and it is thought the Iranian election could also be a factor. Inflation in the United States and German ZEW investment are today's main focus ahead of the API report that will be released this evening.