Spot prices were slightly lower yesterday as a result of higher renewable and nuclear production which made up for a slight increase in demand. A contrast in clean coal and clean gas costs led to mixed movement on the far curve and baseload prices for calendar-14 went down slightly.

Gas contracts went down slightly at close yesterday with Day-Ahead falling by 1.65ppt while the system remained long for most of the session. Winter-14 dropped by 0.35ppt and August-13 fell by 1.05ppt; Front-Month Brent lost $0.21/bbl which helped the gas curve close at a discount. The power curve followed the direction of gas as generation levels improved due to a number of coal plants returning online. Day-Ahead closed £0.65/MWh down and Front-Month lost £0.45.MWh while quarterly contracts saw no change and seasonal contracts encountered minimal price drops.

Gas contracts went up slightly this morning except Day-Ahead as the system was 17mcm long at the start of the session. September-13 made a gain of 0.20ppt and Q4-13 added 0.65ppt to its price. Front-Month Brent strengthened which was the main factor for the bullish market as political tensions continue to effect oil prices. Flows were also lower at several terminals with LNG flows dropping by 3mcm/ day. Power contracts on the near curve opened with mixed movement as Day-Ahead lost £0.75/MWh on the back of a higher wind generation forecast. However Front-Month contracts were bullish as a result of Brent which increased by $0.78/bbl and coal which went up by $0.75/tn. Further along the curve seasonal contracts saw price increases which ranged between £0.05/MWh and £0.10/MWh.

Market close data has revealed that the 1-year forward price for commercial gas went down while commercial electricity made a small gain - closing at 68.42ppt and £52.20/MWh, respectively. This can be seen in the graph below. 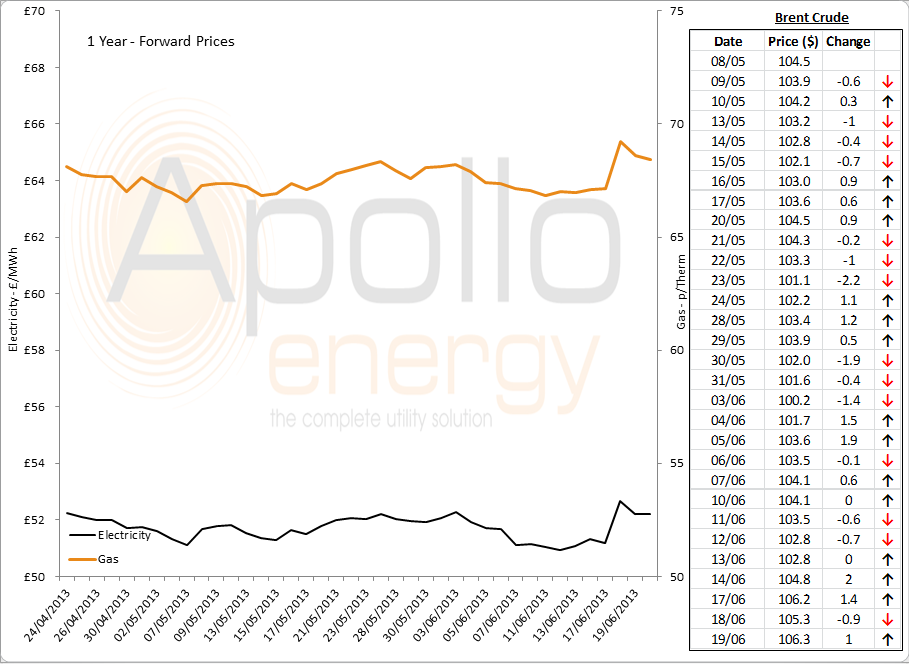 Brent 1st nearby prices went up yesterday and closed above $106/b as API data was higher than expected due to a decrease in crude inventories which should lead to prices going up once again. The EIA inventory report which is set to be released this afternoon may have an effect on tomorrow's prices and EIA data could also help the market turn bullish should crude stocks fall more than anticipated.