Spot prices opened lower yesterday but made a small rebound in the afternoon following a drop in renewable production. Gas, carbon and oil prices are all displaying bearish sentiment this morning and this should help weigh on power prices. Improved supply from Norway and eased political tensions helped gas prices to fall yesterday. The UK gas system opened 17mcm short this morning as Langeled flows decreased and UK production remains low. Despite this weak supply picture prices are expected to record another loss this afternoon. Today's prices can also be found in an easy to read table on our 'current UK energy price' page.

Gas prices moved down on Monday and any gains recorded on Friday were corrected; Q4-14 and Q1-15 decreased by 1.20ppt. Norwegian output improved and offset a drop in flows via the St Fergus pipeline, while UK production remained low. Day-Ahead fell by 0.55ppt and returned to levels seen on Friday morning. Power prices also recorded significant losses and took direction from gas with Q1-15 shedding £1.20/MWh from its price and September-14 and October-14 both displaying a £0.75/MWh loss. Day-Ahead power moved slightly higher as wind generation levels are expected to be reduced for most of the week.

The UK gas system was 17mcm short at the start of today's session as Langeled flows dropped to around 17mcm and Bacton BBL flows were at 4mcm. South Hook send-outs were at a rate of 46mcm and scheduled maintenance has resulted in a weak supply picture in general. Day-Ahead power climbed £0.70/MWh higher as wind production is set to decrease tomorrow. Most power contracts opened at a discount and fell in line with weaker gas, although the losses were less prominent.

Market close data has revealed that the 1-year forward price for both commercial gas & commercial electricity recorded a loss- closing at 58.23ppt and £50.38/MWh,respectively. This can be seen in the graph below. 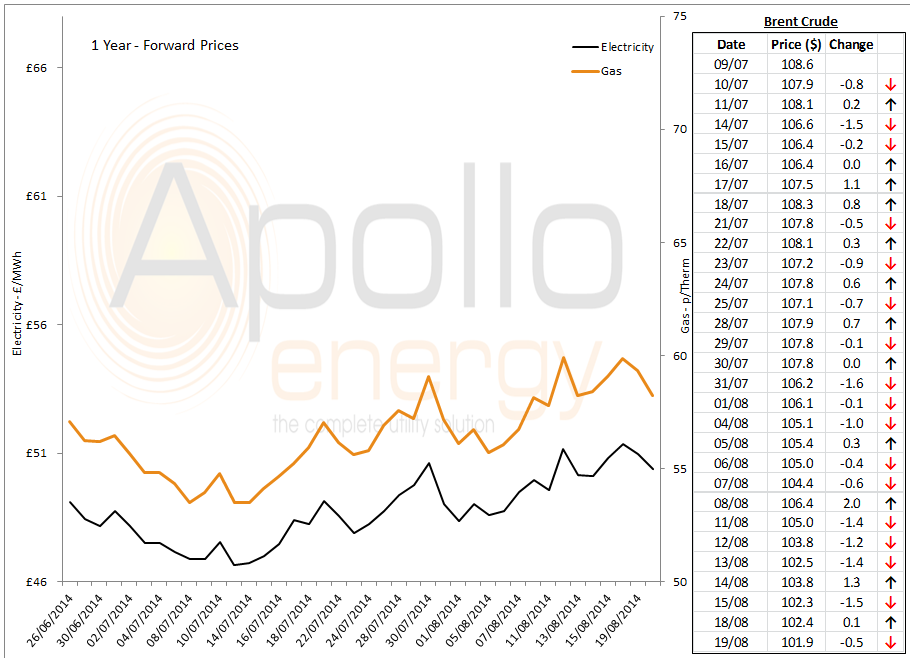 Brent 1st-nearby prices fell towards $101/b yesterday following a calmer outlook in Iraq.