Spot power prices increased yesterday as wind generation in Europe was low and demand levels were pushed higher. Although prices have initially opened lower this morning, a bullish outlook is expected due to a weak wind production and nuclear availability forecast for the weekend. The UK gas system opened short yesterday following a reduction in Norwegian gas flows which resulted in upward movement for prices. The outlook for today is stable to bearish with higher consumption offset by improved flows and positive news from Russia. Today's prices can also be found in an easy to read table on our 'current UK energy price' page.

Gas prices were on the decline towards the end of yesterday's session as Linepack became close to balance with Norwegian flows returning to normal. Day-Ahead fell by 0.15ppt and other contracts displayed losses of up to 0.45ppt. Thursday was generally a quiet day of trading as the market waited on news of the Scottish referendum result and movement on the Ukrainian situation. Day-Ahead power ended the session with a £0.25/MWh gain, while the rest of the curve weakened. A nuclear unit at Dungeness is expected to go completely offline today and will not return until the end of the month which provided support to the prompt.

The UK gas system opened 17mcm long this morning which helped near-curve gas prices decrease, although a stronger British Pound restricted the losses. Further along the curve most contracts moved higher despite an improved supply outlook. On the power curve most near-curve prices fell lower with Day-Ahead shedding £1.55/MWh from its price on the back of weaker gas and healthy supply. Elsewhere, wind generation is expected to double by Monday but only holds a 2% share of the fuel-mix at present.

Market close data has revealed that the 1-year forward price for both commercial gas & commercial electricity decreased - closing at 57.70ppt and £50.40/MWh, respectively. This can be seen in the graph below. 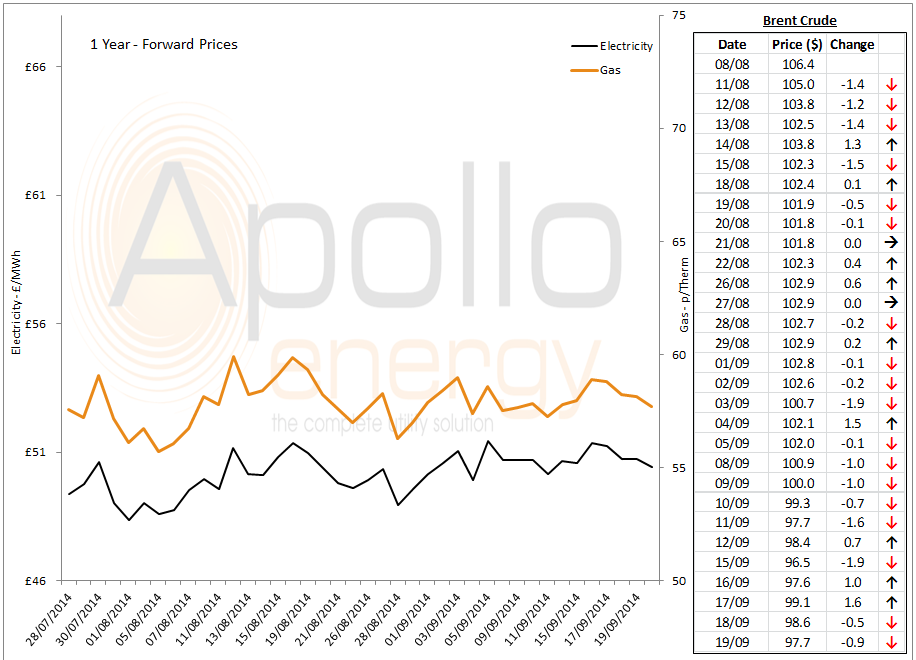 Brent 1st-nearby prices moved higher yesterday but this bullish sentiment was short-lived and prices have recorded further losses today. Brent trades at around $97.8/b, while WTI stands close to $93/b taking the Brent/ WTI spread to -$5/b.