Spot prices are expected to take influence from the mild weather forecast for this week which should lead to lower consumption levels; a drop in nuclear availability should however limit the losses. Friday saw a comfortable UK gas system despite a drop in Langeled flows, gas prices fell as a result. Today should see a reduction in UK LDZ demand which is expected to fall by 12mcm when compared to Friday's levels, Norwegian flows are also expected to pick up slightly leading to stable to bearish prices. Today's prices can also be found in an easy to read table on our 'current UK energy price' page.

Gas contracts turned bearish on Friday as demand levels are expected to be below average for October thanks to milder weather. BBL flows increased and helped balance a short system to compensate for a reduced Langeled output. Day-Ahead gas opened the session with a 2.35ppt loss but moved higher throughout the session to close at 64.5ppt. Prompt power prices also moved down as wind generation was stronger over the weekend and is expected to remain strong for the start of this week. Day-Ahead ignored the usual rise in demand on Mondays and closed the session at £48.15/MWh. Front-Month contracts shed from their price but the losses were limited as a number of power plants are expected to run at reduced capacity for the rest of the month.

Day-Ahead gas moved 1ppt higher over the weekend as Norwegian flows remain low and BBL flows fell to 0mcm which led to the system opening 16mcm short. Front-Month Brent rose to $110/bbl as oil demand has increased and the US dollar weakened which has been a major influence on prices this morning. On the power curve Day-Ahead opened at a £0.15/MWh discount on the back of an improved wind production forecast tomorrow. The December-13 EUA price decreased by â‚¬0.05/tn but remains above the monthly average of â‚¬5/tn. In terms of the generation mix, Coal-fired generation's share fell from 29% to 16% and wind production increased its share to 7%.

Market close data has revealed that the 1-year forward price for both commercial gas & commercial electricity went up - closing at 66.63ppt and £52.38/MWh, respectively. This can be seen in the graph below. 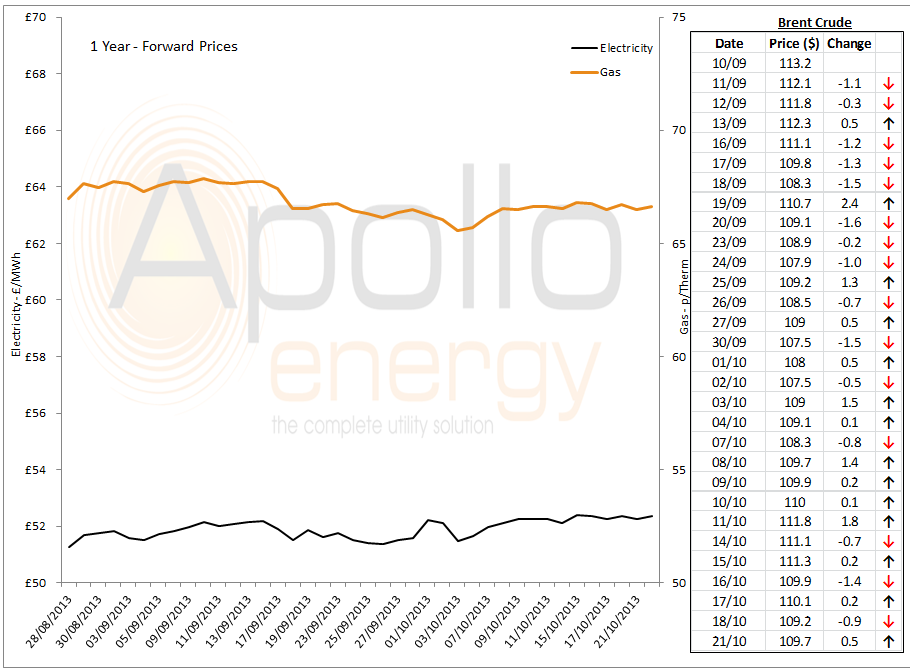 Brent prices went up on Friday and were supported by an improved outlook for the global oil market; Brent 1st-nearby prices climbing to $110/b, a gain of $0.83/b.