Spot prices made further gains yesterday as the cold weather has resulted in high demand levels, these below average temperatures are expected for the rest of the month. Yesterday gas prices moved higher despite comfortable supply levels as the cold weather forecast was the main driver of the market. UK LDZ demand is 13.2% above the seasonal average after a 37mcm increase today, however the system is currently over-supplied and prices should remain stable as a result. Today's prices can also be found in an easy to read table on our 'current UK energy price' page.

Gas contracts moved higher yesterday but only marginally, Front-Month added 0.10ppt to its price and January-14 registered the largest gain of the session going up by 0.30ppt. Day-Ahead rose by 0.15ppt due to the colder temperatures and demand levels are expected to grow for the rest of the week. On the near-curve, power prices took direction from their gas counterparts with Front-Month increasing by £0.35/MWh. Small losses were observed further along the curve as prices ignored the small gains made by APi2 coal on the back of supply concerns in the new year.

Day-Ahead gas hit a seven month high of 70.65ppt this morning following an increase of 0.25ppt as the UK continues to suffer below average temperatures. Linepack opened the session at 15mcm long as flows via South Hook were at a rate of 27mcm. On the far curve, most contracts managed to make a small loss. Prompt power moved in the opposite direction to gas as Day-Ahead shed £2.40/MWh from its price as wind levels are expected to strengthen by around 50%. Other contracts moved higher due to higher demand, while seasonal prices were driven by climbing Brent and APi2 coal.

Market close data has revealed that the 1-year forward price for commercial gas fell slightly while commercial electricity kept its price - closing at 67.62ppt and £52.85/MWh, respectively. This can be seen in the graph below. 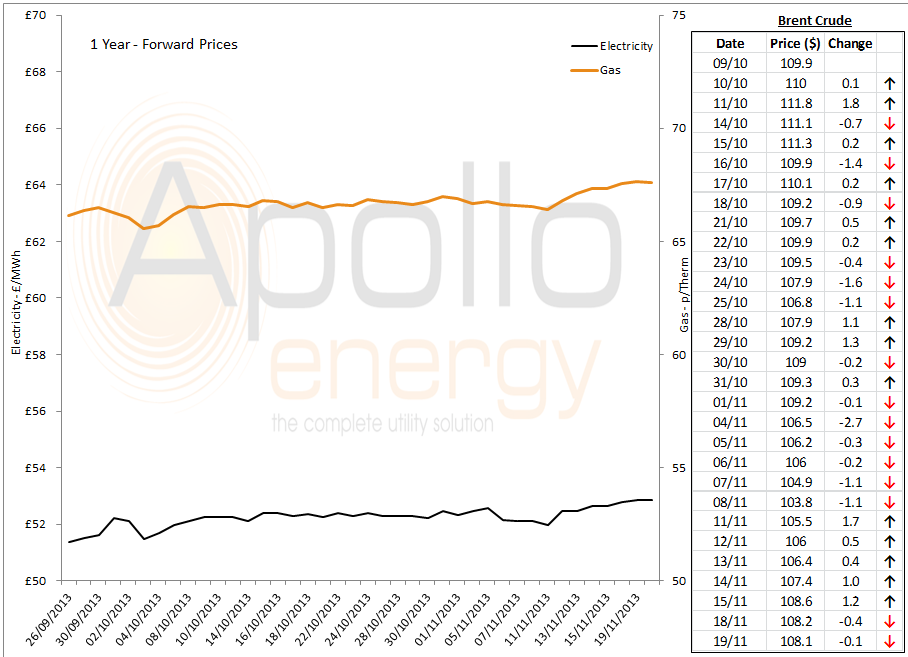 Brent 1st-nearby prices remained around the $108.5/b mark as the market waits for news regarding the Iranian nuclear programme; WTI fell by 0.82/b, taking the Brent/WTI spread to -$14.5%.