Spot power prices climbed higher yesterday due to a number of outages at lignite-fired power plants in Germany and a drop in renewable energy production. Prices are rather stable today as traders keep an eye on the weather/ demand forecast which could pressure prices down. Gas prices also displayed gains on Tuesday as a slight drop in temperature influenced traders, although milder weather is set to return before the weekend. There has been very little change to the supply/ demand picture today which could weigh on prices this afternoon. Today's prices can also be found in an easy to read table on our 'current UK energy price' page.

Gas prices showed a steady increase towards the end of Tuesday's session despite a comfortable UK gas system. Day-Ahead rose by 1ppt from its opening price, while the rest of the curve saw increases of up to 0.50ppt. The power curve inched higher yesterday afternoon with contrasting weather reports providing some support. Day-Ahead increased on the back of low wind production and various outages, while far-curve contracts followed stronger gas and oil prices.

Day-Ahead gas recorded another increase this morning while other near-curve contracts also displayed small gains. Overall gas flows are lower today which led to the bullish movement at the start of the curve with South Hook flows dropping to 36mcm. Mixed weather reports are also causing some market volatility. It is now thought that the UK could experience colder temperatures next week with milder weather returning in December. An expected drop in wind production tomorrow has helped to support Day-Ahead power which has added over £1/MWh to its price. The rest of the curve displayed mixed movement with Front-Month falling by £0.15/MWh and Q1-15 opening at a £0.20/MWh premium.

Market close data has revealed that the 1-year forward price for both commercial gas &   while commercial electricity kept its price - closing at 56.13ppt and £50.60/MWh, respectively. This can be seen in the graph below. 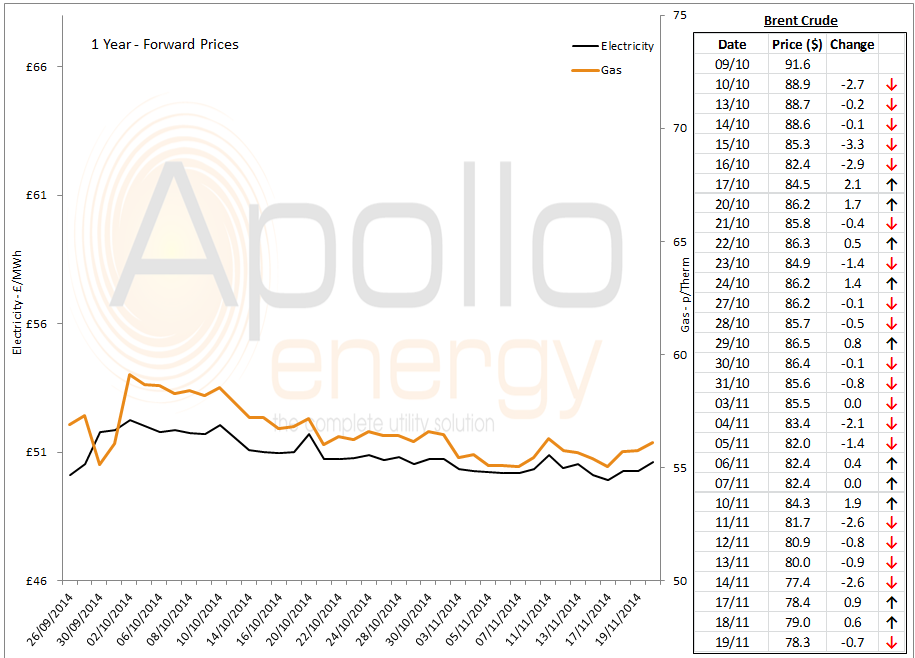