The UK is experiencing cold temperatures this week which has increased heating demand but above average temperatures are expected to return before the end of the month. The optimistic weather forecast resulted in bearish movement for power prices yesterday which has continued this morning. Despite stronger demand levels, gas prices followed a downward trend on Monday due to over-supply. The supply picture was relatively unchanged this morning and this should lead to further prices drops during today's session. Today's prices can also be found in an easy to read table on our 'current UK energy price' page.

Gas prices displayed losses yesterday except Day-Ahead which moved higher due to the significant rise in demand. Gas prices recorded price-drops of up to £0.60/MWh as supply levels were healthy despite lower storage withdrawals from Holford and Aldbrough. Output via Bacton BBL increased by 11mcm, while a further three LNG deliveries are expected in the UK this week. Day-Ahead power was the only contract to move higher yesterday with contracts falling by £1.25/MWh on average. Demand for heating rose significantly on Monday but weaker gas was the main driver of prices.

Gas prices continued on their bearish trend this morning as the UK gas system has opened over-supplied once again, with strong Norwegian imports boosting overall gas flows. Strengthening fuel prices helped to support some far-curve prices but losses were still evident. Wind generation levels remain low today and a revised forecast shows that these low levels are set to continue until Friday. An increase in the price of coal and carbon failed to have any real impact on far-curve prices as seasonal contracts decreased by as much as £0.35/MWh.

Market close data has revealed that the 1-year forward price for both commercial gas & commercial electricity decreased - closing at 44.53ppt and £43.40/MWh, respectively. This can be seen in the graph below. 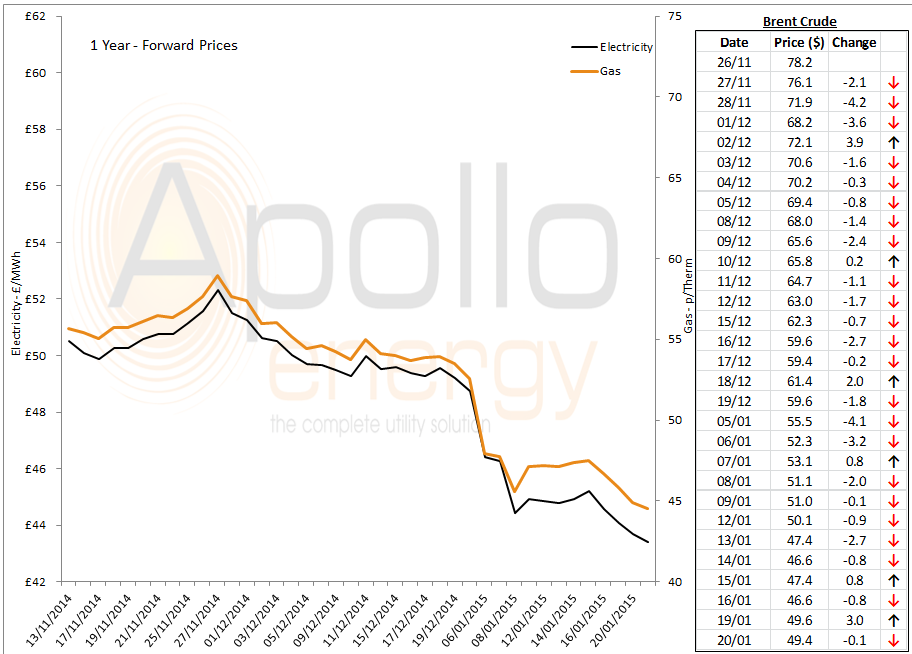 Brent 1st-nearby prices recorded a loss yesterday following healthy gains over the weekend and remain around $49/b. However, the outlook for this week is generally supportive and an increase is expected.