Spot power prices have initially opened lower this morning but a rise is expected in the afternoon as a revised weather forecast predicts colder weather for the middle of next week, while wind and nuclear generation remains low. Gas prices decreased yesterday despite unplanned outages in Norway as demand levels were comfortable. However, an upward correction in prices is expected today with influence coming from the colder weather forecast. Today's prices can also be found in an easy to read table on our 'current UK energy price' page.

Gas prices decreased yesterday as very little buying took place between traders during a quiet session. Losses were evident across the curve even though the UK gas system was short for the majority of the day. Power prices were dictated by falling gas yesterday and losses were displayed across the curve; price-drops for Brent and Coal were also a bearish factor. Temperatures were expected to remain mild today and over the weekend which provided additional downward pressure.

The UK gas system is 11mcm short today as overall gas flows were lower than previous days, following a drop in storage withdrawals. Temperatures remain around the seasonal norm although a temporary drop is expected next week, while three LNG deliveries are expected to arrive in the UK before the end of the month. Power prices were pushed higher by an increase in gas and Brent although demand levels remain around the seasonal average. Coal-fired generation currently holds a 38% share of the fuel mix as nuclear production has fallen to 20%. Elsewhere, approval has been granted in the UK to begin work on the world's largest offshore wind farm, Dogger Bank.

Market close data has revealed that the 1-year forward price for both commercial gas & commercial electricity decreased - closing at 49.50ppt and £45.88/MWh, respectively. This can be seen in the graph below. 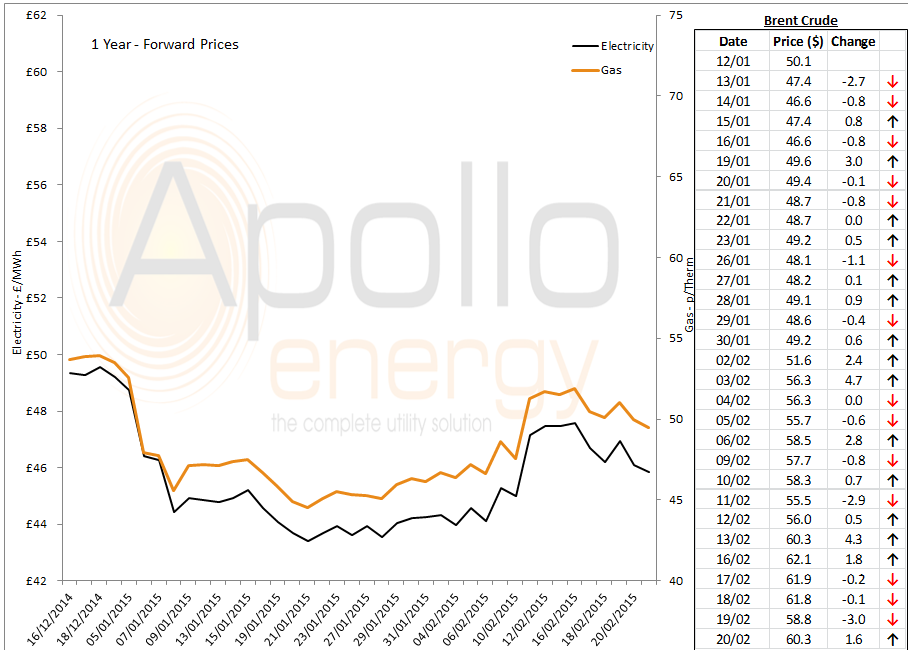 Brent 1st-nearby prices recorded a small loss yesterday but have opened higher this morning; currently trading above $60/b.