Spot power prices saw mixed movement across Europe yesterday on the back of a varied weather forecast with the UK expecting a cold spell over the next week. Today prices are expected to remain stable although potential support could be offered to contracts if the carbon market strengthens. Gas prices were influenced by healthy supply levels and low demand which led to contracts recording losses yesterday. Today UK LDZ demand has risen by 10mcm and a further rise is expected as colder temperatures are forecast over the weekend. Far-curve prices should remain stable to bearish today but prompt prices are expected to move higher.

The gas curve displayed a bearish trend yesterday with losses as high as 0.60ppt; Day-Ahead recorded the smallest loss of less than 0.10ppt as Linepack was 16mcm short. Some prompt contracts received support from healthy storage withdrawals while seasonal contracts moved down as a consequence of weaker Brent. Power contracts recorded minor losses as a stronger carbon market offered support to the curve. Day-Ahead climbed £0.45/MWh higher on the back of strengthening carbon contracts, April-14 showed no changed and seasonal contracts fell by as much as £0.65/MWh.

Linepack opened 20mcm long as Langeled flows increased to 70mcm; gas flows in general improved by 10mcm. Day-Ahead opened 0.40ppt lower and downward movement was displayed across the curve with losses ranging between 0.20ppt and 0.50ppt. Storage levels are currently around 52% full; this time last year levels were at just 10%. The majority of power prices also moved down and took direction from gas although some contracts further along the curve posted gains, including Summer-15. Weaker Brent was another factor for the bearish sentiment as the contract recorded a $1.01/b loss.

Market close data has revealed that the 1-year forward price for both commercial gas & commercial electricity decreased - closing at 60.80ppt and £48.83/MWh, respectively. This can be seen in the graph below. 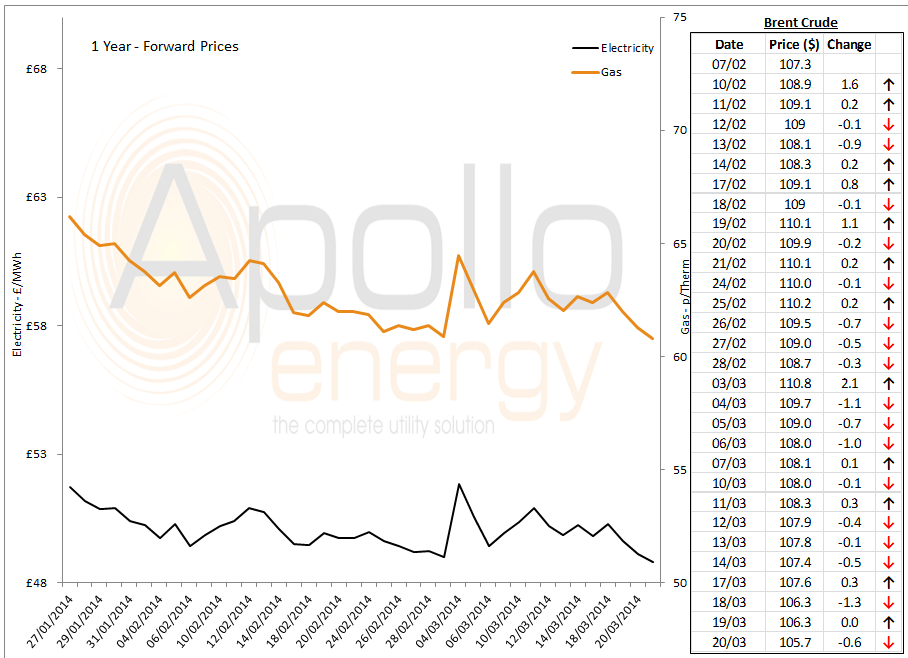 Brent 1st-nearby prices fell by $0.94/b yesterday to close below $106/b although small gains were posted overnight. WTI also moved higher this morning to reach $100/b; the Brent/ WTI spread now stands at -$7/b.