Spot power prices moved down this morning with warmer temperatures expected to return next week, while today's eclipse had no major effect on solar production. However, wind and nuclear generation is set to be reduced over the weekend. Gas prices moved down yesterday after a bullish session on Wednesday as Norwegian and UK flows were stronger. Colder temperatures are forecast for the weekend but the system is expected to cope with this rise in demand as supply levels remain healthy; gas prices have decreased further as a result. Today's prices can also be found in an easy to read table on our 'current UK energy price' page.

Losses were observed across the gas curve yesterday as Norwegian flows ramped up as outages at two facilities were resolved; a warmer weather forecast for next week also offered bearish support. Weaker Brent helped to weigh on some far-curve contracts although the maximum capacity of the Rough storage facility is set to be significantly reduced following a fault. Power contracts also dropped in price and followed their gas counterparts with the Day-Ahead contract recording a loss of £1.40/MWh. Seasonal contracts also tracked the movement of gas, with falling coal and oil weighing on some far-curve prices.

Gas prices have continued on a bearish trend this morning as strong supply is the main market driver despite a slight uptick in demand. Concerns regarding UK storage levels have failed to have much influence on the curve with weaker Brent helping to weigh on far out contracts. Day-Ahead power has increased by £2/MWh this morning as consumption levels are expected to increase tomorrow, while wind production and nuclear generation will be down. However, the rest of the curve displayed losses with weaker gas influencing the majority of contracts.

Market close data has revealed that the 1-year forward price for both commercial gas & commercial electricity decreased - closing at 46.78ppt and £43.85/MWh, respectively. This can be seen in the graph below. 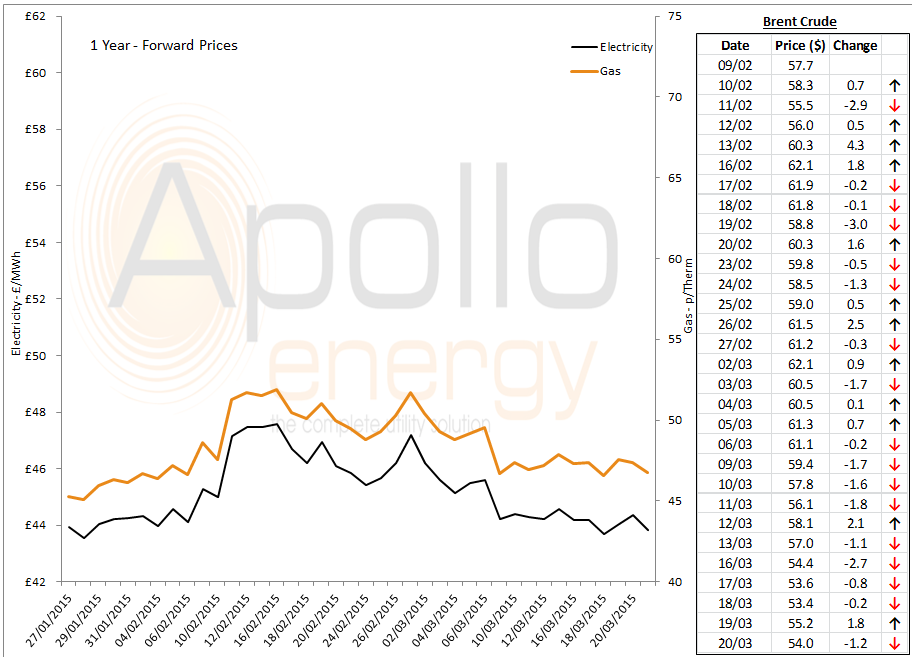 Brent 1st-nearby price rebounded on Wednesday but recorded a loss during yesterday's session of $1.48/b; currently trading at $54.04/b.