Spot prices are expected to go down in the next few days because of healthy supply levels and warmer weather which has led to lower demand; wind production is also forecast to go up slightly. Further out the prices held firm until the vote on backloading was decided yesterday afternoon which led to prices falling.

Prompt contracts added to their price due to an unexpected outage at a Norwegian gas field while the market is also waiting on an interconnector in Belgium to return online. The spread between Day-Ahead and Front-Month has shortened to 5ppt which is still thought to be a substantial margin. LNG send outs stood at 44mcm and 3 deliveries are expected to arrive at Milford Haven next week. Day-Ahead power shed £0.50/MWh from its price while front month contracts followed a similar trend to gas and went up. These gains were limited however due to weaker carbon prices which have fallen by 7% as it is thought the voting for the backloading proposal will be favourable.

NBP prices followed the bearish direction of Brent with significant losses made by seasonal contracts; Front-Month Brent dropped by $1.67/bbl following reduced demand in China. The system opened up 21mcm long however Langeled flows fell from 43mcm to 35mcm which led to the system plummeting to 5mcm long. August-13 and September-13 opened around 65ppt and July-13 started the session at 63.8ppt. Power contracts also made losses this morning with Day-Ahead opening at a £0.65/MWh discount due to the usual drop in demand expected on Friday. 2 units at the combined coal and oil plant in Didcot went offline but this had no bearing on prices. Coal currently holds a 30% share of the generation mix while CCGT decreased its share but remains the main fuel source for electricity.

Market close data has revealed that the 1-year forward price for commercial gas went up slightly while commercial electricity made a loss - closing at 68.43ppt and £52.05/MWh, respectively. This can be seen in the graph below. 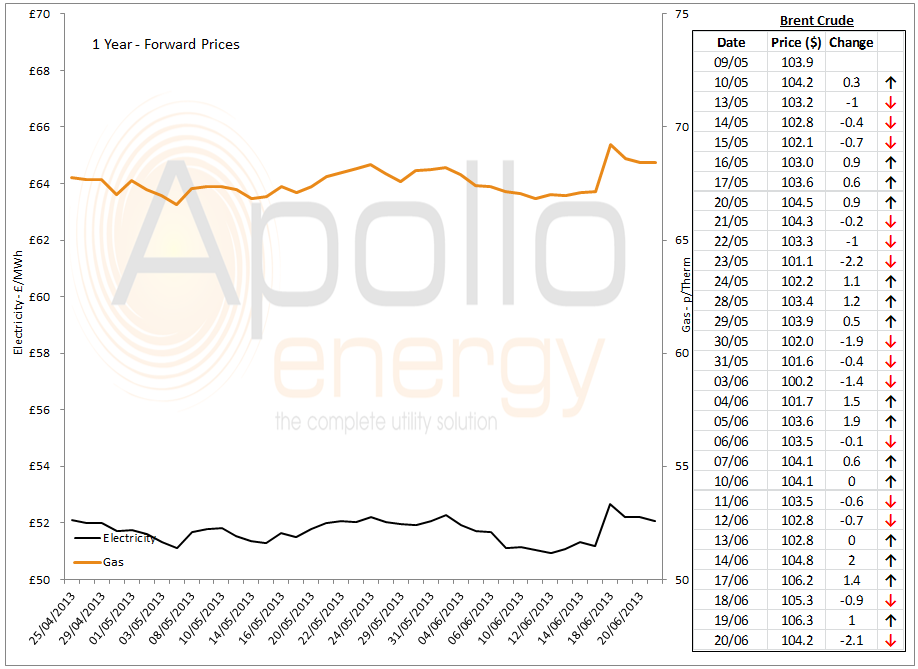 Brent 1st nearby prices went up by $0.1/b yesterday but made a more significant loss today of around $2/b following the recent Fed meeting. The EIA report was also bearish and Chinese manufacturing PMI also weakened. Stronger European PMI data this morning may support the price of oil but that would depend on this afternoon's US data release.