Spot power prices remain quite tight at the moment on the back of reduced renewable generation across Europe and lower thermal availability. Nuclear production is also down following an outage at the Tihange-1 in Belgium. However, a warmer weather outlook for July has provided some bearish pressure. Gas prices increased on Friday as the UK gas system was short throughout the session, following a drop in Dutch imports and an outage at the North Morecambe sub-terminal. The system has opened long this morning as Dutch imports have increased significantly, while a number of scheduled LNG deliveries over the next few days has provided further bearish pressure and prices have moved down. Today's prices can also be found in an easy to read table on our 'current UK energy price' page.

Gas prices inched higher on Friday as the UK gas system fell 23mcm short due to a halt in imports via the Dutch BBL pipeline, falling from a rate of 12mcm in the previous session. However, an increase in storage withdrawals helped to balance the system by 3pm. The power curve also displayed gains as overall generation levels were expected to be lower next week, while temperatures were also forecast to be below average. Wind generation is set to have a peak-daily average of below 1GW this week, while UK temperatures could be 3 °C below the seasonal norm.

UK supply levels are much healthier this morning which has resulted in downward movement across the curve. Dutch imports have returned to normal, helping towards a long system, while a number of LNG deliveries are expected to arrive in Europe this week, further improving the supply outlook. Power prices have followed their gas counterparts this morning and have moved down despite cooler temperatures and a weak generation outlook. Some bearish pressure was provided by weaker oil and fuel prices, weighing on some far-curve contracts.

Market close data has revealed that the 1-year forward price for both commercial gas & commercial electricity decreased - closing at 45.50ppt and £43.93/MWh, respectively. This can be seen in the graph below. 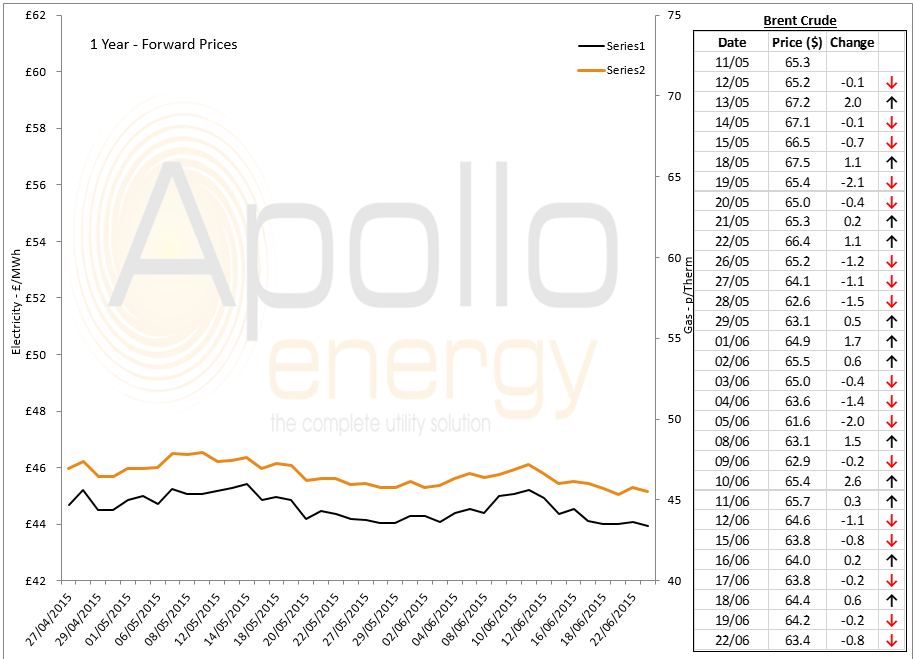 Brent 1st-nearby prices have displayed a slight rebound this morning following some bearish movement towards the end of Friday's session, however, prices remain below $64/b. Upward pressure has been provided by the Greek crisis with proposal talks on-going.