Near-curve gas prices lost momentum yesterday as bearish fundamentals pushed oil prices down. NBP Day-Ahead however was supported by increased demand paired with supply tightness as a result of lower than normal temperatures. Langeled flows remained at 17mcm yesterday, though the National Grid reported that British stocks touched 50.5TWh for the first time this decade.

The UK system remained short throughout yesterday's session as temperatures stayed below the seasonal norm, though bearish pressure persisted on Day-Ahead prices. Supply is expected to remain tight for the next couple of days as both the Norwegian and Flags pipelines undergo maintenance. Sept-14 contracts rose to 50.75ppt on the back of the heightened outlook for gas-burn.

Power contracts made gains yesterday due to an increase in demand alongside reductions in wind generation. Seasonal contracts furthered their losses from Monday as tensions over the Ukrainian crisis continue to lessen.

The majority of the gas curve opened at a discount this morning, regardless of lower temperatures and a short system, with Day-Ahead showing the largest losses of 0.95ppt. BBL saw slightly improved flows of 16mcm compared to flows of less than 10mcm for the previous week. Sept-14 shed 0.70ppt from its value, whilst further out on the curve losses were more constrained, with Win-16 falling by 0.10ppt.

An expected increase in wind generation meant Day-Ahead power followed its gas counterpart this morning, shedding £1.75/MWh from its value. Heysham sees one of its nuclear units remain offline, due to boiler problems, until October when it will begin operations at a lower capacity for nine months. As with the gas curve, seasonal power prices failed to shed value to the same extent as the prompt.

Market close data has revealed that the 1-year forward price for both commercial gas & commercial electricity recorded a loss- closing at 57.63ppt and £49.78/MWh,respectively. This can be seen in the graph below. 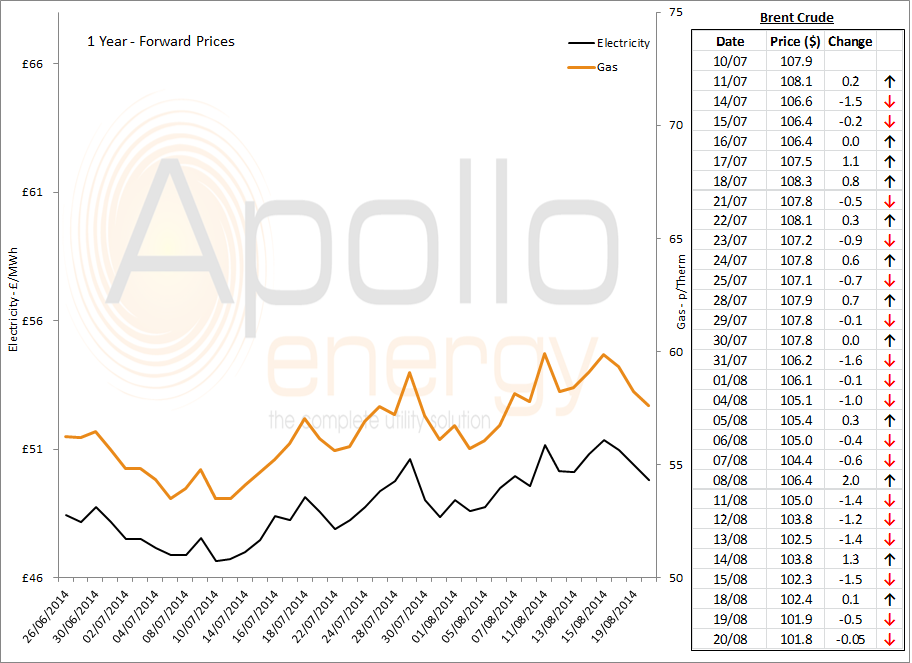 Brent prices closed relatively flat yesterday, whilst WTI-1st prices dropped, placing the curve in contango ahead of the changing reference contract. As the geopolitical situation remains unsettled across the Ukraine and Iraq, it is likely that prices will strengthen.