Spot prices moved down yesterday due to the usual drop in demand on Fridays and on the back of an improved wind generation forecast. A drop in Langeled flows led to a tighter UK gas system and in turn resulted in higher NBP prices yesterday. UK LDZ demand increased by 4mcm today and is currently 16.8% above the seasonal average, while Langeled flows are at their maximum level, helping towards a slightly long gas system. Temperatures are expected to turn milder next week and should be around the seasonal average which could help December-13 prices fall. Today's prices can also be found in an easy to read table on our 'current UK energy price' page.

Day-Ahead gas climbed 0.35ppt higher despite a long system earlier in the day which became balanced in the afternoon due to an improved withdrawal rate at the Rough facility. Langeled was flowing at around 50mcm as gas flows in general were largely unchanged. Further along the curve the majority of contracts moved down, with December-13 falling by 0.15ppt and Front-Quarter showing no change. On the power curve Day-ahead made a gain of £0.25/MWh earlier in the session but held firm for the rest of the day. The usual drop in demand on Fridays limited any gains but maintenance at a 500MW coal plant helped prices turn bullish. There was no clear curve on the rest of the curve as December-13 fell by £0.45/MWh and January-14 added £0.20/MWh to its price.

Prompt gas prices opened at a discount as temperatures are expected to be milder for the next week or so, Day-Ahead fell by 0.40ppt while December-13 also moved down. Langeled flows ramped up to 70mcm and South Hook increased to 40mcm with an LNG delivery expected today. Day-Ahead power climbed £0.25/MWh higher as the usual rise in demand on Mondays influenced the contract. Further along the curve sentiment was mixed as falling December-13 took direction from a milder weather forecast and seasonal contracts moved higher with stronger coal and oil a factor.

Market close data has revealed that the 1-year forward price for commercial gas went up while commercial electricity retained its price - closing at 67.39ppt and £52.55/MWh, respectively. This can be seen in the graph below. 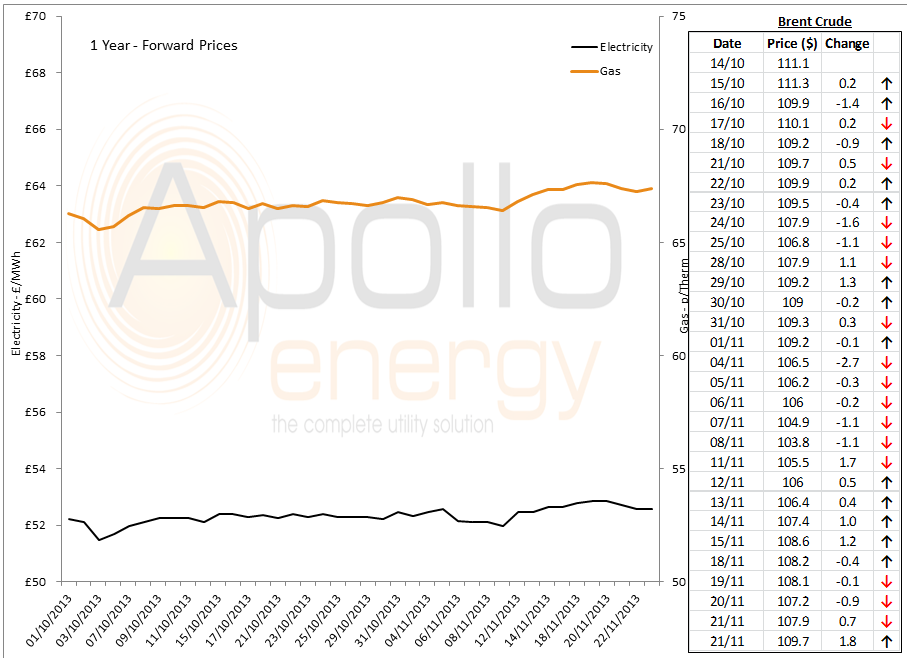 Brent 1st-nearby prices rose by $2/b yesterday as talks regarding the Iranian nuclear programme did not reach a conclusion. Brent stands just below $110/b while WTI also went up by $2/b to $95/b.