Spot power prices moved higher yesterday afternoon as the UK continued to experience cold temperatures which led to a surge in demand. The upward movement has continued today as the cold temperatures remain with further influence coming from stronger gas. Gas prices followed a bearish trend for the majority of yesterday's session as the UK gas system was over-supplied throughout the day. There has been little change to overall supply but the cold weather is expected to continue next week, providing support to prices. Today's prices can also be found in an easy to read table on our 'current UK energy price' page.

Demand levels were on the rise as the UK took extra heating measures to combat the cold weather. However, the outages in Norway last week have been completely resolved and overall supply is extremely healthy which led to numerous losses across the gas curve. Power prices initially opened lower yesterday but a rebound occurred in the afternoon following a revision in temperatures; cold temperatures are now expected to last until mid-February. Day-Ahead moved £0.25/MWh higher as wind generation was expected to decrease on Wednesday.

Gas demand remains above average this morning with little change in temperatures, with this cold stint expected to last longer than anticipated. The majority of gas contracts have climbed higher as a result, with Front-Month adding 0.70ppt to its price. Power prices opened at a premium this morning with upward movement observed across the curve. However a biomass plant is expected to return online this afternoon after being shut-down over the weekend which has provided some bearish pressure.

Market close data has revealed that the 1-year forward price for both commercial gas & commercial electricity increased - closing at 45.09ppt and £43.70/MWh, respectively. This can be seen in the graph below. 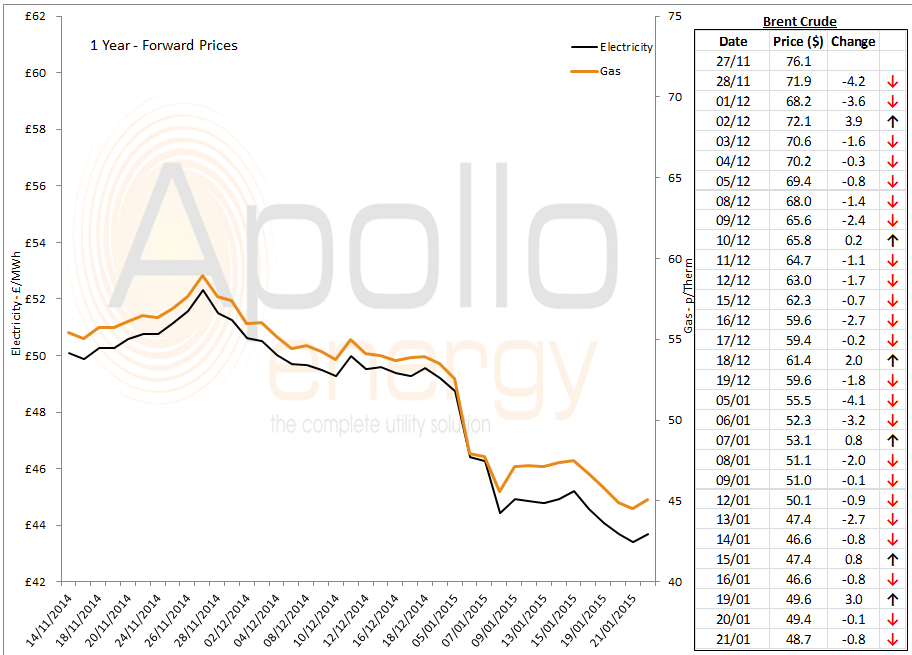 Brent 1st-nearby prices fell by $0.85/b yesterday but the decrease was limited by positive data from Asia; Brent currently trades below $49/b.