Spot power prices decreased over the weekend but the outlook for the start of the week is bearish, as colder weather should drive demand levels higher, while wind and nuclear generation remains rather weak. A slight increase in demand and reduced storage withdrawals pushed gas prices higher on Friday. Gas prices are expected to increase further today despite imminent LNG deliveries as a temporary cold snap is expected to increase consumption. However, fundamentals are generally bearish and a downward correction can be expected in the coming days. Today's prices can also be found in an easy to read table on our 'current UK energy price' page.

A small rise in demand and weaker overall gas flows resulted in gains across the gas curve on Friday. The Euro also strengthened against the British Pound which assisted the bulls and a healthy LNG outlook failed to have much influence. Power prices followed their gas counterparts on Friday and moved higher with direction coming from a revised weather forecast which predicts colder weather this week. Day-Ahead recorded a loss on the back of an expected increase in wind generation over the next few days.

Wind generation remains low but levels are expected to rise to around 5GW this week, while nuclear availability has not improved. Power prices are generally bearish with the exception of the Day-Ahead contract which was influenced by the colder weather forecast. Three LNG deliveries are expected to arrive in the UK in the next few weeks which has helped to weigh on prices this morning. Overall gas flows are largely unchanged from Friday, while weaker Brent has helped restrict upward movement on the far-curve.

Market close data has revealed that the 1-year forward price for both commercial gas & commercial electricity decreased - closing at 48.78ppt and £45.45/MWh, respectively. This can be seen in the graph below. 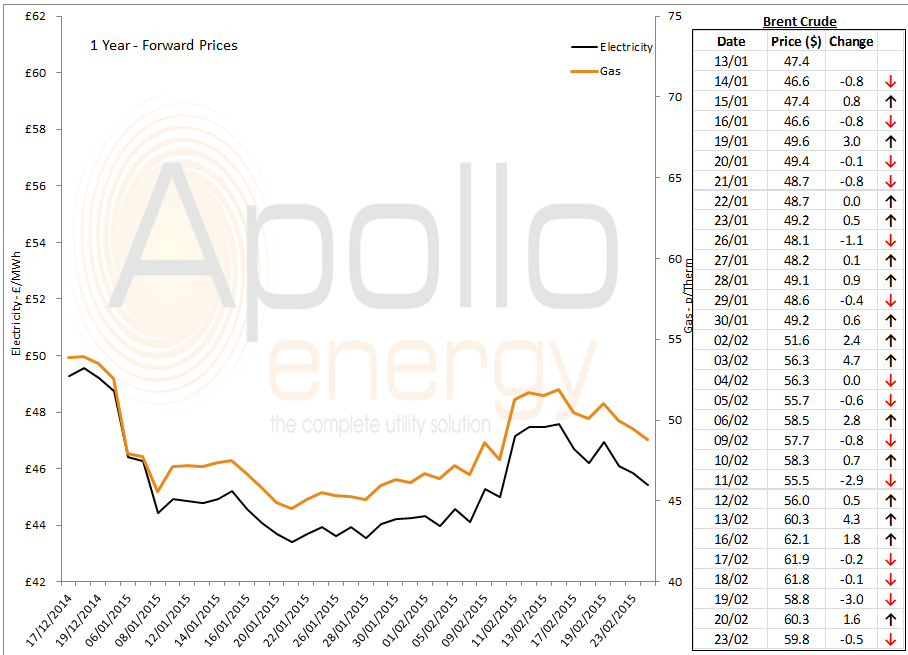 Brent 1st-nearby prices displayed very little movement towards the end of last week and remained around $60/b. Today's outlook is generally bearish and prices currently trade $59.78/b with additional losses likely.