Spot power prices inched higher this morning following a drop in solar generation and thermal availability. Prices are expected to keep their current level this afternoon although a slight drop could occur if coal prices weaken. Gas prices moved down yesterday as demand levels remained low and Norwegian exports into the UK were strong. Today UK LDZ demand has climbed 12mcm higher although BBL flows have increased to 40mcm, leading to a long UK gas system. However gas prices could rise this afternoon due to a cold European weather forecast for the weekend.

Day-Ahead gas was the only contract to move down yesterday and recorded a 0.65ppt loss due to a low demand forecast for today. The rest the curve ended the session unchanged or displayed a slight gain. The UK gas system was long in the morning but became balanced by the end of trading, while colder temperatures are expected this weekend. On the power curve Day-Ahead climbed £2.55/MWh higher as wind generation levels are expected to plummet over the weekend. The bulls were somewhat limited by the weak demand levels expected for Friday as well as the return of a nuclear power plant. The majority of contracts displayed no movement by the end of the session while some seasonal contracts recorded a small loss.

Gas contracts opened at a premium this morning as demand levels rose by 12mcm. Day-Ahead rallied 0.85ppt higher despite improved flows via Langeled and BBL and prices took direction from the colder weather forecast. On the far-curve contracts showed little movement as Q2-14 increased by just 0.10ppt and some monthly contracts opened flat. Power prices showed no clear direction at the start of today's session as Day-Ahead rose by £0.90/MWh and the two Front-Month contracts fell by £0.25/MWh. Wind production is predicted to fall over the weekend and a further drop is anticipated next week. Seasonal contracts recorded only minor changes as no contract moved by more than £0.20/MWh.

Market close data has revealed that the 1-year forward price for both commercial gas & commercial electricity moved higher - closing at 61.13ppt and £49.10/MWh, respectively. This can be seen in the graph below. 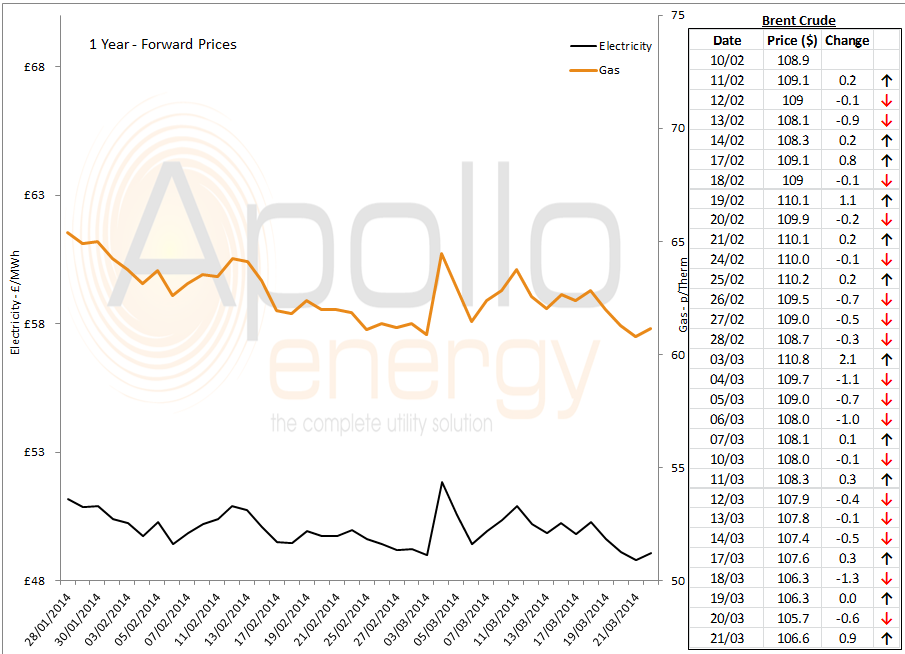 Brent 1st-nearby prices made a slight gain yesterday of $0.60/b to open around $106.4/b this morning. In contrast, WTI fell by $1/b following the change in the current Front-Month contract.