Supply levels will be helped by improved nuclear generation in Germany and demand over the weekend is expected to be at reasonably low levels.   Coal prices both clean and conventional went down which also led to a decrease in power prices on the spot market.

Gas contracts continued to display a bearish outlook with Day-Ahead and Front-Season both shedding 0.50ppt. Winter-13 has made gains of around 2.00ppt from the start of the week as Norwegian flows are expected to be reduced for most of that season. Further along the curve some contracts went up slightly due to recent storage injections resulting in a decrease in system length. A number of power plants had their return dates postponed including the Dungeness 530MW nuclear reactor which is expected to return at the start of July. Day-Ahead added £0.15/MWh to its price despite the usual drop in demand on Friday's and Winter-13 fell by £0.20/MWh.

Day-Ahead opened the session by dropping 0.30ppt following an increase in Langeled and St Fergus flows. Near-Curve prices made losses and followed the direction of Front-Month Brent which stood at $106/bbl on Wednesday but is now $102.8/bbl. NBP storage levels are just under 50% which also helped gas contracts open at a discount. Most power contracts went down this morning and the biggest loss was seen by Day-Ahead which fell by £1.50/MWh. On the far curve Summer-14 fell by £0.75/MWh and Winter-14 dropped £0.55/MWh. Weaker Brent prices influenced power contracts while spot EUA and coal prices made small gains but did not impact power contracts.

Market close data has revealed that the 1-year forward price for both commercial gas & commercial electricity made a loss - closing at 68.03ppt and £51.83/MWh, respectively. This can be seen in the graph below. 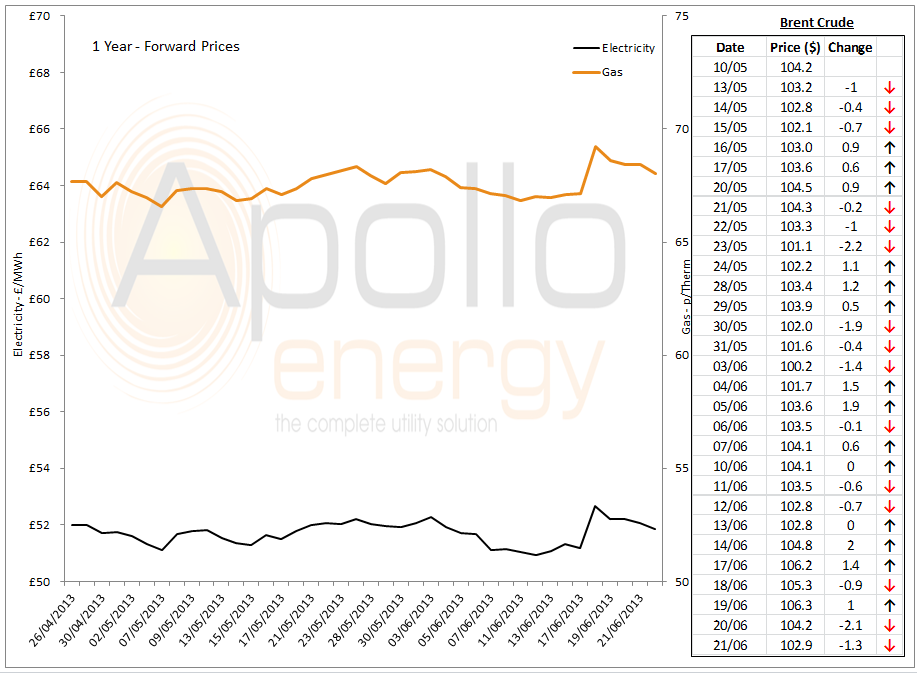 Brent 1st nearby prices made another significant drop yesterday after a sale of risky assets as a result of weak Chinese PMI data. Crude prices could be supported if the financial markets stabilise and refinery margins improve but further price drops are expected in the coming days.