There was little change to spot power prices yesterday with reduced wind output and increased nuclear availability balancing out any movements. Weak supply-demand conditions are expected to persist over the next few days, though the potential for a spike in prompt prices cannot be dismissed if there is an unexpected upturn in consumption, or a loss in available capacity. Belgium released news yesterday that Doel-3 and Tihange-2 would not be suitable for operation until Spring, with a real possibility they may not reopen.

European gas prices continued on their downward trajectory as the lack of additional headlines from the Ukraine led to further omissions of risk premiums. Despite British demand rising above seasonal averages yesterday, an increase in BBL flows alongside withdrawals from Holford meant NBP prompt prices weakened. Fundamentals are expected to remain weak ahead of the Kollsnes processing plant beginning maintenance today.

The Day-Ahead gas contract shed 1.10ppt yesterday regardless of cool temperatures and increased gas-burn. Forecasts of warmer temperatures and a healthy UK supply over the coming days placed some bearish pressure on contracts running throughout the summer. There is increased potential for coal to fall behind gas-fired generation in the fuel mix as Sept-14 contracts are pressured.

Power contracts mirrored the losses seen across the gas curve yesterday. Day-Ahead closed at £38.35/MWh alongside an expected increase in wind generation for Thursday. Peak power demand is forecast to increase slightly on Thursday. Further out on the curve there was little change, whilst seasonal contracts continued to see some of the greatest losses, with Winter-14 shedding £1.05/MWh.

Bearish influences persisted across the gas curve this morning, as increased gas flows from Holford and the UKCS allowed for a long system and healthy supplies. Losses spread as far out as the seasonal contracts, with Winter-14 losing 0.45ppt from its value. Capacity restrictions on UK Interconnectors are expected from October onwards, as regulations seek to align with EU rules. This ought to free up capacity during periods of high demand.

Day-Ahead power saw the largest loss this morning, dropping by £0.75/MWh. Power contracts were forced down by the weakening of the gas curve as consistent flows from the continent and LNG placed the near curve under bearish pressure. Seasonal contract remained firm, with Winter-14 opening at a slight gain of £0.10/MWh.

Market close data has revealed that the 1-year forward price for both commercial gas & commercial electricity recorded a loss- closing at 57.01ppt and £49.60/MWh,respectively. This can be seen in the graph below. 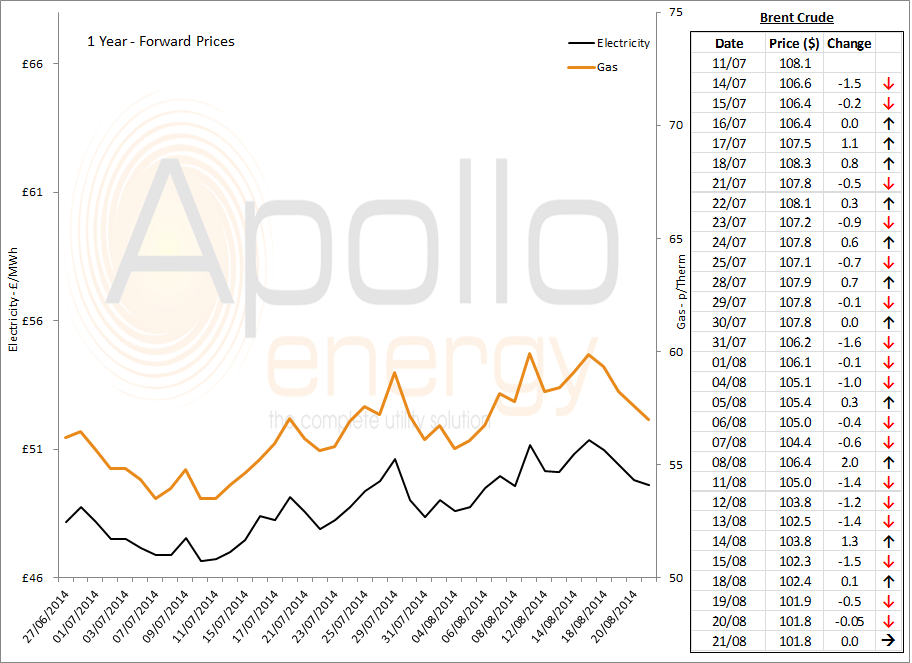 Since yesterday morning, Brent prices have persisted around the $102/b mark. WTI prices recovered to $96/b prior to the September contract expiring, though October contracts have recoiled slightly to $93/b. The current geopolitical environment suggests that prices will turn bearish again today, with Brent 1st nearby potentially falling below $101/b.