Spot power prices are displaying mixed movement this morning as the UK is currently experiencing very strong wind but nuclear availability and conventional power generation is low. The unbalanced supply picture as resulted in an unclear outlook for this afternoon and prices are expected to fluctuate. Gas prices decreased yesterday as demand levels were below average and the supply picture for the winter period is healthy. Today UK LDZ demand has climbed 20mcm higher but still remains below the seasonal norm. However, on-going talks regarding Russian gas transit into Europe is the main market driver and prices should fall if an agreement is reached. Today's prices can also be found in an easy to read table on our 'current UK energy price' page.

The gas curve displayed numerous losses yesterday as flows via the BBL pipeline strengthened and demand levels in the UK were below average. Rumours of an agreement in Brussels regarding Russian gas also influenced some traders. Power prices failed to display any clear trend yesterday as a strong wind production forecast was offset by weak nuclear and gas-fired generation. Day-Ahead ended the session lower as high wind generation levels were expected today but some prices on the near-curve moved higher.

Day-Ahead gas added 1.30ppt to its price this morning despite improved output at Langeled as flows via the Norwegian pipeline increase to 61mcm. Talks involving Russia, Ukraine and the EU will continue today and it is thought that an agreement is close. Power prices were on the rise this morning with Day-Ahead adding over £3.00/MWh to its price as wind generation levels are expected to halve tomorrow. The prompt also garnered support from numerous outages at nuclear power plants, with a delayed restart at the Dungeness facility also a factor. Seasonal contracts opened relatively unchanged, ignoring falling Brent and instead took direction from gas.

Market close data has revealed that the 1-year forward price for commercial gas moved higher while commercial electricity was unchanged - closing at 56.38ppt and £50.75/MWh, respectively. This can be seen in the graph below. 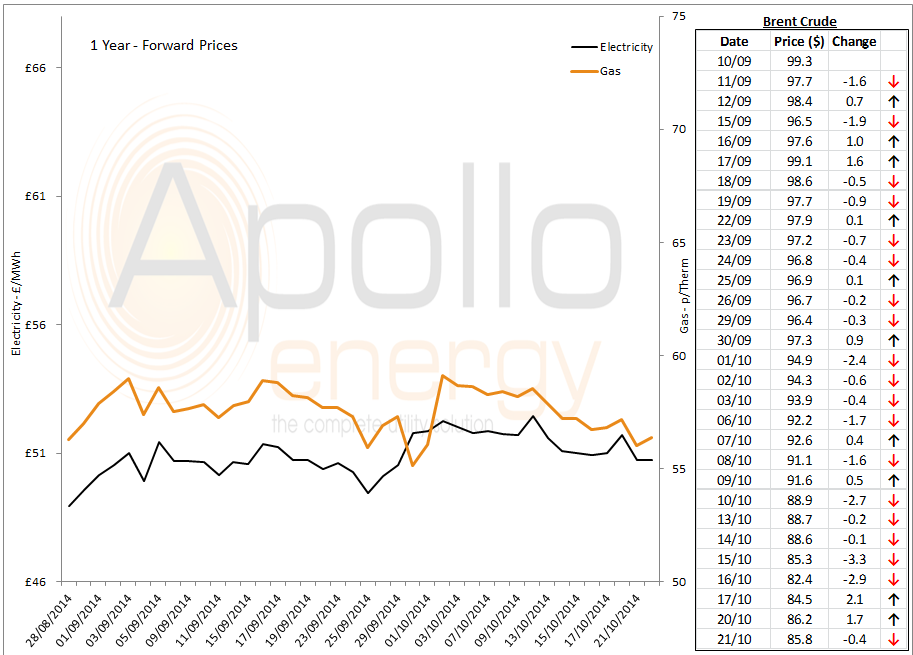 Brent 1st-nearby prices decreased yesterday and currently trade at around $85.5/b, while WTI continue to trade below $82.7/b. The market is currently waiting on the effects of recently released GDP data from China.