Spot power prices are on the rise at present but there is some uncertainty regarding how long the current cold weather in the UK will last. At the start of the week it was expected that above average temperatures would return before the end of January, however, a revised forecast predicted cold weather until mid-February, before an upward revision again last night. Rising demand and an unplanned outage in the UK pushed gas prices higher during yesterday's session. Prices have opened higher once again this morning but another revision in temperatures and a healthy supply picture should see a downward correction this afternoon. Today's prices can also be found in an easy to read table on our 'current UK energy price' page. .

Gas prices recorded gains yesterday as an outage at the Rough storage facility pushed prices on the near-curve higher. Temperatures were also forecast to remain at below average levels until next week at least which offered support further along the curve. The power curve also displayed upward movement with direction coming from gas and cold weather which has increased demand. Day-Ahead moved higher on the back of this rise in demand, while an expected drop in wind generation today also offered support.

Two LNG deliveries are expected to arrive at South today and tomorrow which has helped to restrict any gains this morning. However, overall movement was bullish with seasonal and quarterly contracts displaying the largest increases. Wind generation is expected to ramp up to around 7GW tomorrow which helped Day-Ahead power to fall by £2.80/MWh, with assistance from the usual drop in demand on Fridays. Similarly to gas, the most prominent movement was displayed by seasonal and quarterly prices which moved higher.

Market close data has revealed that the 1-year forward price for both commercial gas & commercial electricity increased - closing at 45.53ppt and £43.95/MWh, respectively. This can be seen in the graph below. 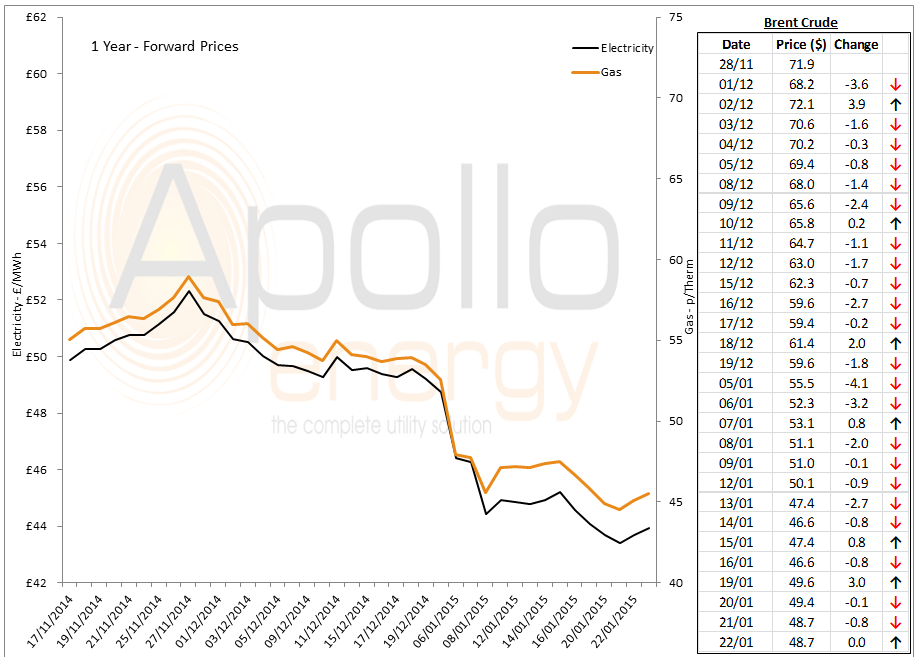 Brent 1st-nearby prices displayed a rebound yesterday as global economic data regarding oil is generally positive. However, prices remain at extremely low levels and Brent currently trades just below $49/b.