Spot power prices moved down yesterday afternoon due to an expected rise in renewable generation and an improved weather forecast for next week. The downward movement has continued this morning as a drop in consumption is expected tomorrow and over the weekend. Gas prices were supported yesterday on the back of on-going maintenance in Norway and above average demand levels. A lower demand forecast for the coming week have helped prices to decrease this morning, with a drop of 18mcm expected compared to yesterday's levels.

Gas prices varied in their movement yesterday with the prompt contract rallying higher on the back of weaker supply. Norwegian gas flows are set to remain low due to maintenance at the Ormen Lange gas field, while flows are also reduced via the Vesterled pipeline. On the far-curve seasonal contracts moved slightly higher, while higher Brent was offset by a stronger British Pound. Power prices displayed upward movement yesterday and ignored losses on the gas curve. Some bullish pressure was also provided by the announcement that the 490MW unit 4 at Ferrybridge power plant will be closed immediately. Day-Ahead power moved higher due to a weaker wind generation forecast, while seasonal contracts also added to their price.

Demand levels are set to fall over the coming days which should help the system cope with weaker Norwegian flows. Gas contracts have posted losses across the curve on the back of this improved supply outlook. A milder weather outlook has helped power contracts to open at a discount this morning and an improved renewable generation forecast has helped the prompt contract to move down. Meanwhile, a slight increase in Brent has restricted some losses on the far-curve.

Market close data has revealed that the 1-year forward price for commercial gas showed no change, while commercial electricity decreased slightly - closing at 46.33ppt and £44.38/MWh, respectively. This can be seen in the graph below. 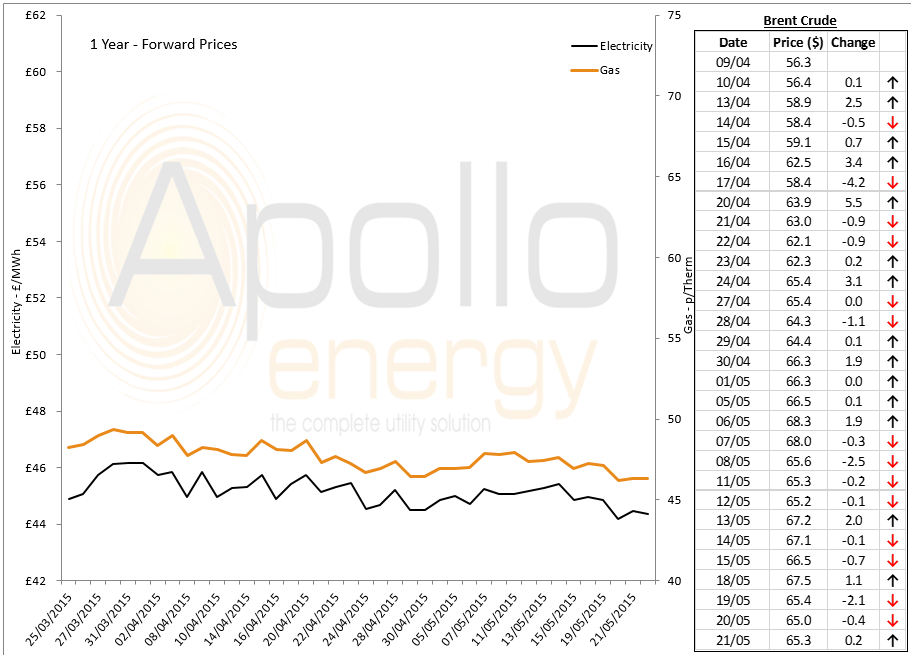 Brent 1st-nearby prices displayed a small rebound yesterday following significant losses on Tuesday, a drop in crude oil stocks in the US has provided some bearish pressure but prices continued to trade below $65.5/b.