Spot power prices are on the decline as nuclear generation has shown a significant improvement and hydro stocks are also much higher than the previous two months; solar and wind generation is also comfortable in European countries. Gas prices moved down yesterday as the UK gas system was balanced despite on-going maintenance in Norway, as demand levels dropped. The UK gas system was long this morning as demand levels have fallen further, however, warmer temperatures are not expected until the start of June; resulting in a stable outlook for gas contracts. Today's prices can also be found in an easy to read table on our 'current UK energy price' page.

Gas contracts eased during Thursday's session as healthy supply levels and a strengthening British Pound helped the bears take control of the curve. The system gained length as the session progressed due to decreasing demand and two more LNG deliveries are expected to arrive in the UK before the end of the month. Power contracts also posted losses yesterday as consumption levels fell considerably compared to earlier in the week. Weaker fuel and carbon contracts also provided downward pressure on the far-curve, while seasonal contracts followed their weaker gas counterparts.

Gas prices continued on their downward trend this morning as temperatures are now close to the seasonal norm and this has been reflected on the demand forecast. Stronger Brent offered some support to contracts on the far-curve but overall movement was bearish. UK demand has fallen further today, displaying a 12% decrease compared to yesterday and this has helped power contracts open at a further discount. This weaker demand outlook has helped the prompt contract to shed from its price with improved renewable generation also a factor.

Market close data has revealed that the 1-year forward price for both commercial gas & commercial electricity decreased - closing at 45.93ppt and £44.18/MWh, respectively. This can be seen in the graph below. 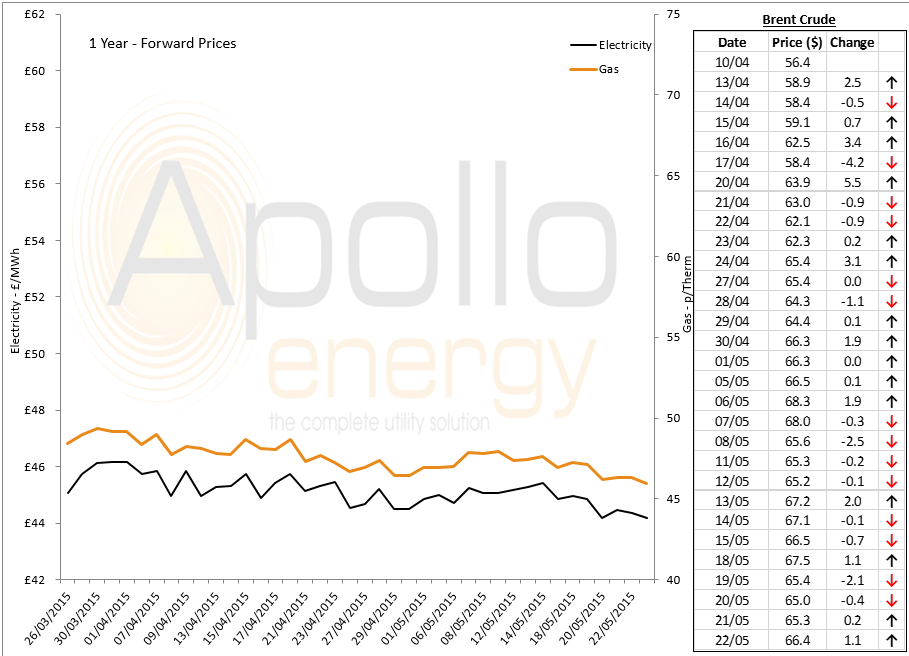 Brent 1st-nearby prices recorded sizeable gains yesterday and have climbed back above $66/b on the back of bullish fundamentals in the US and on-going tensions in the Middle-East.