Spot prices saw little change over the weekend as healthy supply was countered by a slight increase in demand due to lower than average temperatures at present.

The system continued to be well-supplied which led to NBP gas contracts registering losses; Day-Ahead fell by 2.7ppt to close at 55.5ppt. Langeled flows stood at 48mcm and the LNG terminal is expecting a delivery later in the week. Brent made a significant loss over the course of the week starting at $105.7/bbl on Monday and closing at $100.8/bbl on Friday evening. Power contracts took direction from bearish gas contracts while a steady spark spread and a balanced system led to a stable market outlook. The power station in Dungeness had its restart date postponed by a week but this failed to impact on the Day-Ahead contract which dropped to £44.30/MWh.

Day-Ahead gas fell by 0.50ppt at the start of the session, the system opened 10mcm long and total gas flows stood at 186mcm. The rest of the gas curve made small gains which ranged between 0.05ppt and 0.15ppt. Day-Ahead power followed its gas counterpart and made a loss, shedding £0.70/MWh from its price. Wind generation increased by 14% which was the main cause for the Day-Ahead contract going down while EUA spot prices fell to â‚¬0.09/tn was also a factor. The rest of the power curve made gains and ignored weaker Front-Month Brent prices which settled around $100/bbl following a forecast of lower demand in China and the US.

Market close data has revealed that the 1-year forward price for commercial gas made a loss while commercial electricity went up - closing at 67.93ppt and £52.00/MWh, respectively. This can be seen in the graph below. 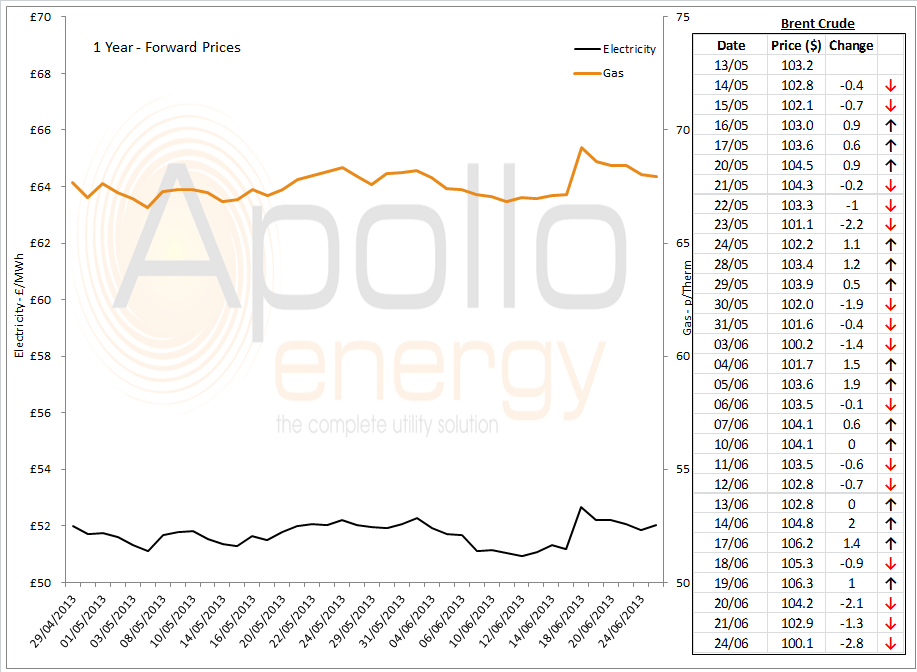 Front-Month Brent made a loss over the weekend following weak US and Chinese data which suggests there could be a drop in demand over the next few days.