Spot power prices have shown little change although wind generation in Germany has improved slightly, providing bearish pressure. Some downward movement is expected this afternoon as commercial demand levels are set to drop tomorrow due to a public holiday in Europe. Gas prices moved down yesterday as three LNG deliveries were scheduled to arrive in the UK at the start of next month. Today UK LDZ demand has risen slightly due to a temporary drop in temperatures; prices should strengthen as a consequence. Today's prices can also be found in an easy to read table on our 'current UK energy price' page.

The UK gas system was short for most of yesterday's trading session which led to a 0.10ppt gain for the Day-Ahead contract. Overall gas flows were relatively unchanged which meant there was little movement on the near-curve with no contract moving by more than 0.15ppt. Day-Ahead power added £0.75/MWh to its price despite improved wind generation levels expected for Wednesday; instead a higher demand forecast influenced the contract. Further along the curve prices showed little movement, with the delayed restart of a power plant providing some bullish support.

Near-curve gas contracts moved higher this morning with Day-Ahead increasing by 0.30ppt due to the UK gas system opening 30mcm short. Langeled flows currently stand at less than 10mcm, while output via the BBL pipeline is also limited. However, monthly contracts managed to record losses as South Hook flows are healthy and LNG deliveries are expected next week. Power contracts showed no clear trend as contracts on the near-curve fell by as much as £0.90/MWh and prices further along the curve moved higher. Both quarterly and seasonal contracts displayed gains as Winter-14 opened at a £0.20/MWh premium and Q4-14 rose by £0.45/MWh.

Market close data has revealed that the 1-year forward price for both commercial gas & commercial electricity made a slight gain - closing at 58.61ppt and £49.83/MWh,respectively. This can be seen in the graph below. 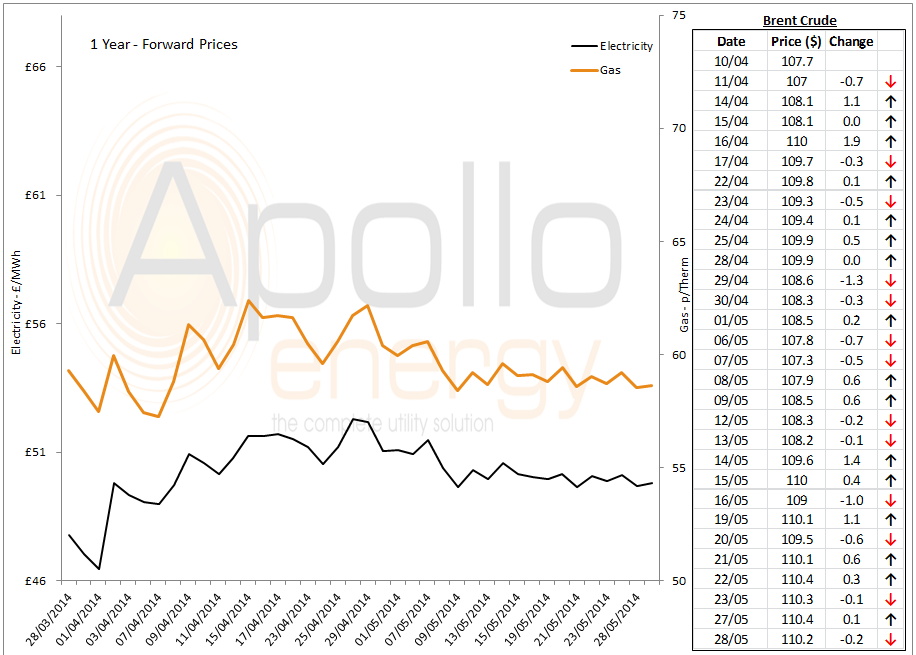 Brent 1st-nearby prices were rather volatile yesterday but ended the session with a $0.30/b loss and trades just below $110.3 this morning. Despite continued tensions in Ukraine and Libya as well as weak US economic data, fundamentals in general are unchanged.