Fundamentals remained constant yesterday as low demand continued to be paired with generous hydro and nuclear generation, meaning once again spot power prices saw little movement. Tests on Doel-3 and Tihange-2 are to be carried out over the autumn when the nuclear regulator will decide on whether the plants are suitable to continue operations. Whilst the near curve remains stable, winter prices are showing signs of concern over tight supplies across Belgium, the Netherlands and France.

The UK gas system was balanced yesterday, withstanding the increase in demand which weighed NBP spot prices down yesterday. Strong exports to the continent and high consumption across the power sector enhanced British gas demand yesterday. Spot prices are expected to decrease further next week as restrictions on Norwegian export capacity are slackened by 29mcm/day, alongside the full shutdown of the BBL pipeline from the 25-30th August.

Mixed sentiment was also seen across the power curve yesterday, with movement ranging from £0.80/MWh to -£0.05/MWh. Day-Ahead made slight gains of £0.25/MWh even though demand is expected to be lower today. Forecasts of above average temperatures in early September have weighed down contracts spanning the summer period.

Day-Ahead gas added 0.40ppt to its price this morning, with Front-Month making the largest gains of 0.60ppt. A slight supply deficit supported the curve as Linepack opened 16mcm short and pipeline maintenance caused a reduction in flows from Norway.

Day-Ahead power continued on its downward trajectory this morning ahead of an expected increase in wind generation, shedding a further £1.40/MWh from its value. The bullish pressure on the gas curve however forced the remainder of the power curve higher, with gains of up to £0.75/MWh. Wind generation continues to cover for reduced nuclear generation, and is now accounting for 8% of today's generation mix.

Market close data has revealed that the 1-year forward price for both commercial gas & commercial electricity recorded a slight gain - closing at 57.64ppt and £49.90/MWh,respectively. This can be seen in the graph below. 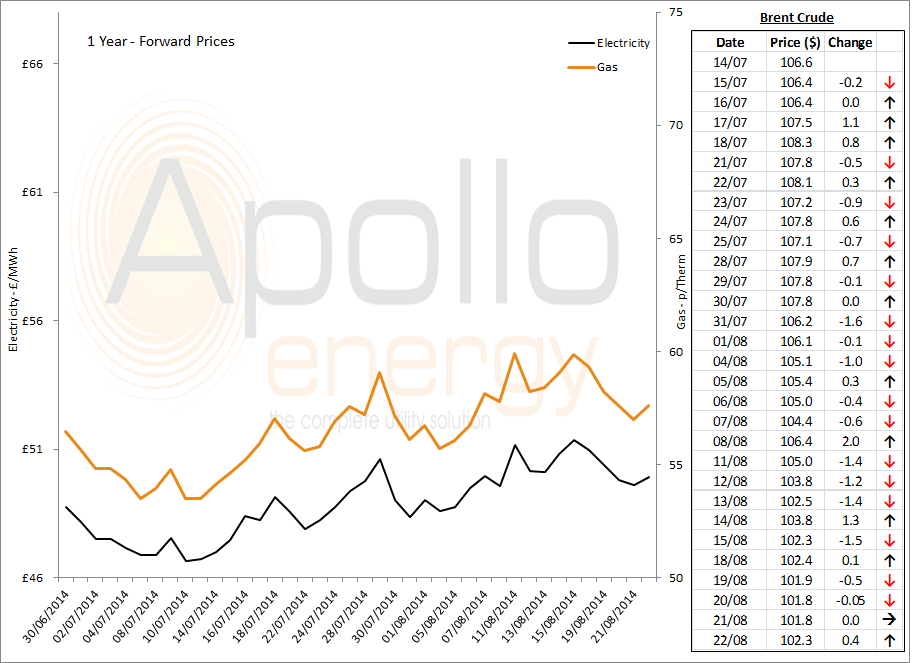 Brent 1st-nearby prices opened at $102.6/b this morning rebounding slightly from the sharp drop to $101.26/b yesterday morning. Despite further escalations in geopolitical tensions across Iraq, the Ukraine and the Gaza Strip, WTI saw losses this morning following the change of reference contract.