Spot prices fell yesterday thanks to a drop in demand and an increase in European wind production. Carbon contracts have made a significant loss this week after a large increase last week on the back of Germany's support for backloading; as a result Calendar-14 prices are expected to fall. In terms of gas, weaker demand levels failed to offset a decline in St Fergus flows while Langeled flows also showed little improvement, ultimately ending in a tight UK gas system and higher NBP prices. Today demand is expected to remain low, Norwegian supply is relatively unchanged and BBL flows have increased which should see November-13 prices move down. Today's prices can also be found in an easy to read table on our 'current UK energy price' page.

Day-Ahead gas was the only contract to register a gain yesterday and closed at 65.90ppt as Norwegian imports remain low. An LNG delivery arrived at the Milford Dock in the afternoon helping South Hook to increase send-outs, making up for low BBL imports and Langeled flows of 25mcm. The power curve closed at a discount with the largest price drops displayed on the near-curve while seasonal contracts fell by around £0.15/MWh. Wind generation is expected to reach a peak of 4.9GWh today which helped Day-Ahead shed from its price. Front-Month took influence from weaker gas contracts and ignored higher APi2 coal prices.

The gas curve saw mixed sentiment this morning with seasonal contracts making gains as the pound has weakened against the Euro. On the near-curve, Day-Ahead fell by 0.20ppt following an improvement in BBL flows which stand at 16mcm and Langeled flows have also strengthened.   Front-Month however failed to take any real direction and currently trades 3ppt higher than Day-Ahead. Day-Ahead power registered a £1/MWh price-drop with the return of a 585MW nuclear reactor the main factor for this, helped by a strong wind generation forecast. Front-Month added £0.25/MWh to its price as several nuclear reactors are expected to remain offline for the rest of this month and the start of November. Further along the curve seasonal contracts made gains despite carbon allowance prices making a sizeable loss.

Market close data has revealed that the 1-year forward price for both commercial gas & commercial electricity decreased - closing at 66.58ppt and £52.30/MWh, respectively. This can be seen in the graph below. 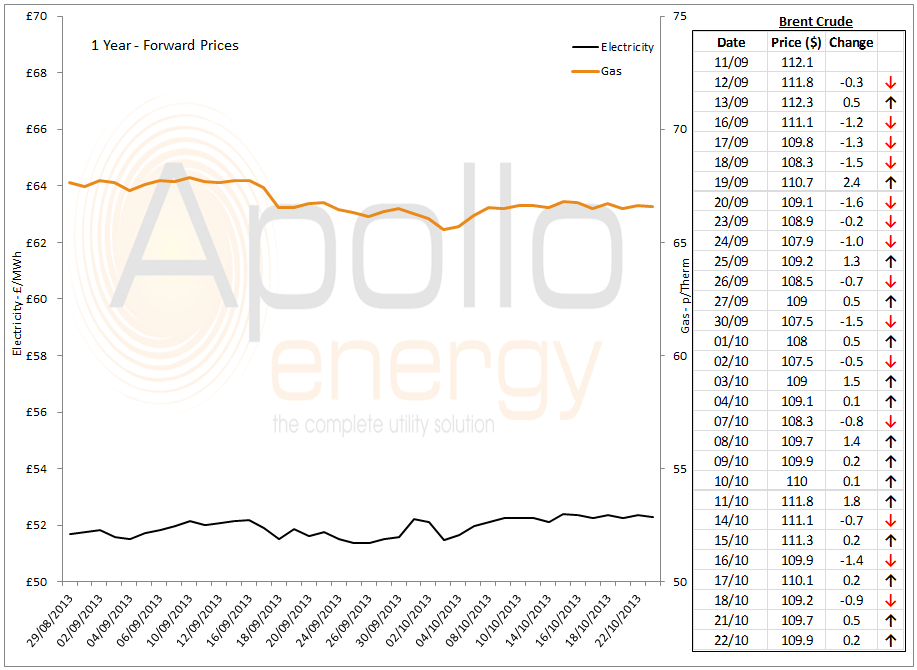 Brent-1st nearby prices have held firm and are currently trading around $109.7/b while WTI fell by $1/b following a rise in crude stocks; the Brent/WTI spread currently stands at -$10.42/b.