Spot power prices are beginning to inch higher as the UK prepares for a spell of colder weather and lower wind production. Prices are expected to record further gains this afternoon on the back of rising fuel costs. Gas prices moved higher yesterday as a result of a colder weather forecast, with traders also waiting on the results of trilateral talks in Brussels. UK LDZ demand continues to rise but the UK gas system was over-supplied this morning due to healthy European production. However, uncertainty in regards to Russian supply into Europe could push prices higher for the time being. Today's prices can also be found in an easy to read table on our 'current UK energy price' page.

The majority of gas contracts displayed gains by the end of yesterday's close as traders await a decision on trilateral talks in Belgium. Day-Ahead also ended the session at a premium and was pushed higher by colder weather, resulting in higher demand. Power prices also followed a bullish trend yesterday with influence coming from gas. Day-Ahead was no exception to the upward movement and strengthened with direction coming from weaker wind production.

Day-Ahead gas was the only contract not to move higher this morning as the UK gas system was 12mcm long on the back of increased LNG output. Gas contracts moved 0.15ppt higher on average and market influence came from strengthening oil. Movement on the power curve was largely bullish this morning with Day-Ahead adding £2/MWh to its price with falling wind production a factor; dropping to around 3.7GW tomorrow. A number of hydro projects were brought online to balance the system which pushed the system buy price to £136/MWh. Further along the curve the majority of contracts opened higher on the back of stronger coal prices.

Market close data has revealed that the 1-year forward price for commercial gas decreased while commercial electricity climbed slightly higher - closing at 56.25ppt and £50.78/MWh, respectively. This can be seen in the graph below. 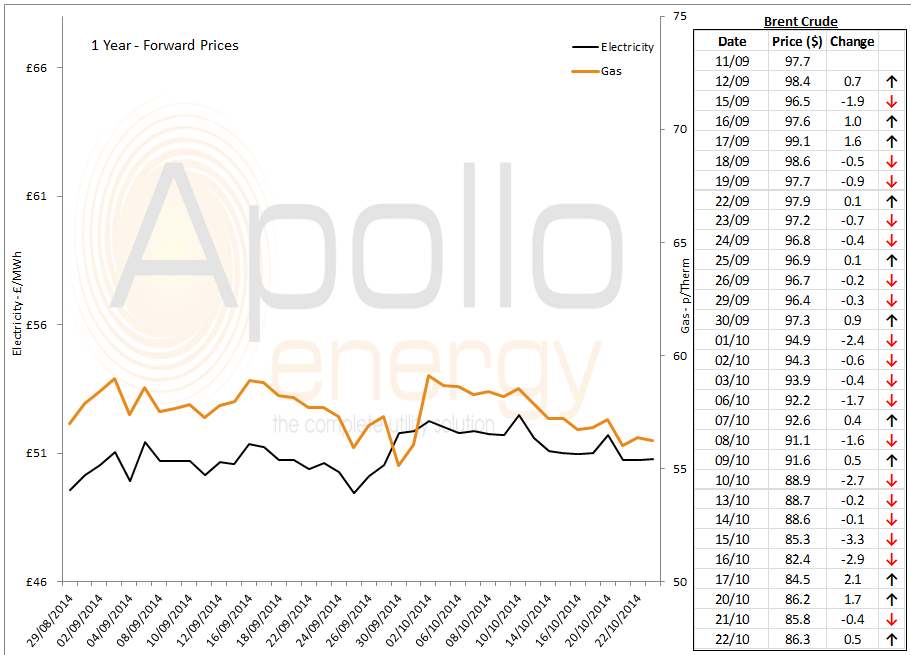