Spot power prices moved slightly higher yesterday afternoon as commercial demand levels rose following the Easter weekend and there was a slight reduction in supply. Temperatures for the rest of the week are expected to be around the seasonal average, while renewable and nuclear production is rather weak. However, a drop in carbon prices should push prices down today. Gas prices weakened yesterday as fundamentals were generally bearish despite a close to balanced system. Further losses are expected this afternoon as there is little change to the supply picture and oil prices are forecast to fall. Today's prices can also be found in an easy to read table on our 'current UK energy price' page.

Day-Ahead gas fell by 1.25ppt as the UK gas system fell to around 17mcm short on the back of weaker gas flows, following maintenance in Norway. The rest of the curve also displayed a downward trend as Front-Month decreased by 1.15ppt and Winter-14 closed 1.25ppt lower. Prompt power prices ignored weaker gas and climbed higher except for Day-ahead which was unchanged and Front-Month which fell by £0.45/MWh. These contracts were influenced by the return of a number of power plants. Further along the curve the losses were more noticeable with Winter-14 shedding £0.80/MWh from its price.

The UK gas system was almost 20mcm long this morning which was assisted by a 10mcm increase in Langeled flows. Day-Ahead opened at a 0.60ppt discount while the rest of the near-curve also saw losses of around 0.70ppt on average. Wind generation is expected to decline tomorrow which has limited any bearish movement by Day-ahead. The losses observed on the gas curve helped to influence prompt power contracts while stronger carbon contracts helped push seasonal contracts higher.

Market close data has revealed that the 1-year forward price for both commercial gas & commercial electricity decreased - closing at 59.62ppt and £50.55/MWh,respectively. This can be seen in the graph below. 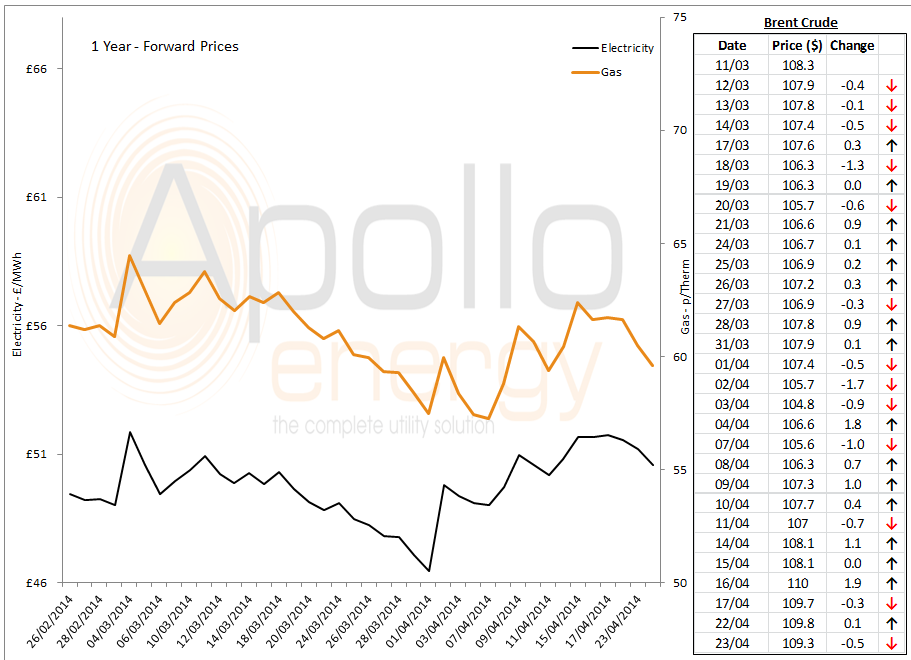