Spot power prices moved down yesterday as wind generation levels ramped up on the continent and demand levels were rather low. Today temperatures are slightly cooler and coal prices have displayed upward movement so a firm to bullish outlook is expected this afternoon. Despite weak demand, gas prices inched higher due to an outage in Norway which limited overall gas flows. UK gas demand is similar to yesterday's levels this morning and despite Langeled flows registering another drop the supply picture is quite stable as South Hook and BBL flows have improved; as a result, little movement is expected today. Today's prices can also be found in an easy to read table on our 'current UK energy price' page.

Most gas prices made minor gains yesterday although Day-Ahead managed to record a 0.40ppt loss as the UK gas system was long throughout the day, despite weaker output from Langeled. Day-Ahead power saw little movement and only moved £0.10/MWh higher by the end of the session due to healthy wind generation. Further along the curve prices displayed a downward direction as Winter-14 closed £0.20/MWh lower and took influence from gas, ignoring stronger oil and coal.

The UK gas system initially opened 16mcm long this morning but sharply fell to 5mcm short as Langeled flows plummeted to around 8mcm due to maintenance at the Ormen Lange gas field. However, South Hook send outs increased which offset the drop in Norwegian flows somewhat. On the power curve Day-Ahead added £0.10/MWh to its price as wind generation levels are expected to halve tomorrow. Most near-curve prices opened at a premium with support coming from gas, while stronger carbon helped push far-curve prices higher.

Market close data has revealed that the 1-year forward price for both commercial gas & commercial electricity decreased - closing at 58.72ppt and £49.90/MWh,respectively. This can be seen in the graph below. 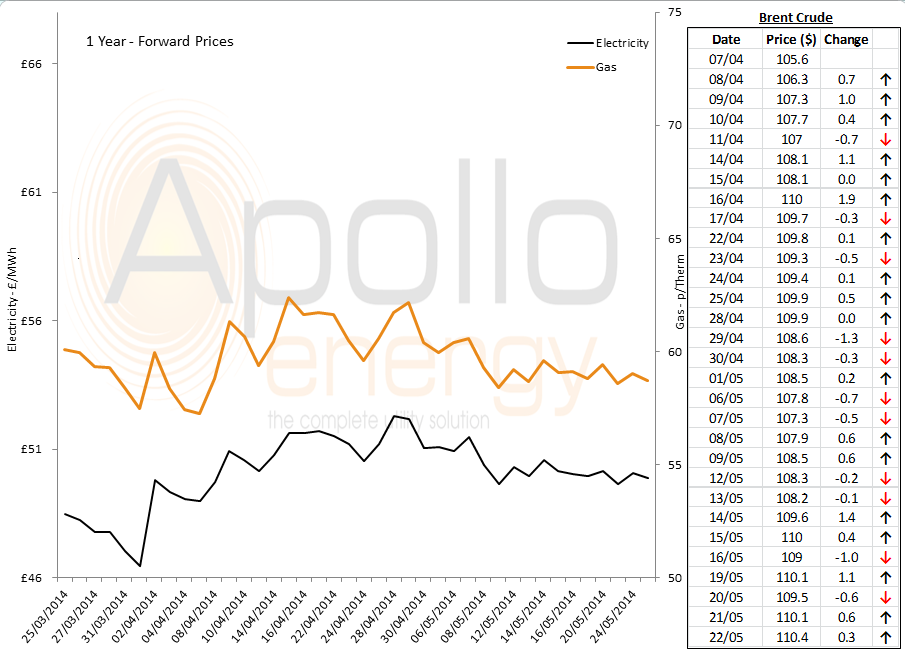 Brent 1st-nearby prices stand at around $110.4/b today following a $0.86/b gain on Wednesday due to weak economic data from China and on-going problems in Libya.