Spot power prices were on the rise yesterday as a result of lower thermal supply, reduced coal & lignite-fired generation and an outage at a German nuclear power plant. A further rise could be expected today as the power plant in Germany remained offline throughout the night and carbon contracts have strengthened slightly. Gas prices held firm yesterday as European demand levels remain quite low but bullish tension came from weaker Norwegian output due to summer maintenance. Demand levels aren't expected to change too much from yesterday and despite Norwegian maintenance, supply is fairly healthy; little change to gas prices is expected this afternoon as a consequence. Today's prices can also be found in an easy to read table on our 'current UK energy price' page.

Gas prices were mostly unchanged yesterday with Day-Ahead displaying a 0.05ppt gain and the two Front-Months showed no change whatsoever. Langeled flows were at 8mcm due to maintenance at gas fields while Holford was withdrawing at a rate of 22mcm; the system remained short throughout the session. Day-Ahead power increased by £0.35/MWh while Front-Month also moved higher and added £0.40/MWh to its price; the rest of the near-curve recorded a small loss. There was no clear trend on the far-curve and any movement was minor.

The gas curve moved slightly higher this morning with some influence coming from the bank holiday weekend which should lead to an increase in residential demand. Day-Ahead rose by 0.05ppt while August-14 was the biggest mover and opened at a 0.40ppt premium. Gas flows were weaker as BBL flows fell to 6mcm and withdrawals from Holford were required to make up for this drop. Power contracts were also on the rise except for Day-Ahead and Front Month, the prompt fell by £0.15/MWh on the back of improved wind generation. Further along the curve contracts saw gains of up to £0.25/MWh and Brent remains stable.

Market close data has revealed that the 1-year forward price for both commercial gas & commercial electricity climbed higher - closing at 59.20ppt and £50.13/MWh,respectively. This can be seen in the graph below. 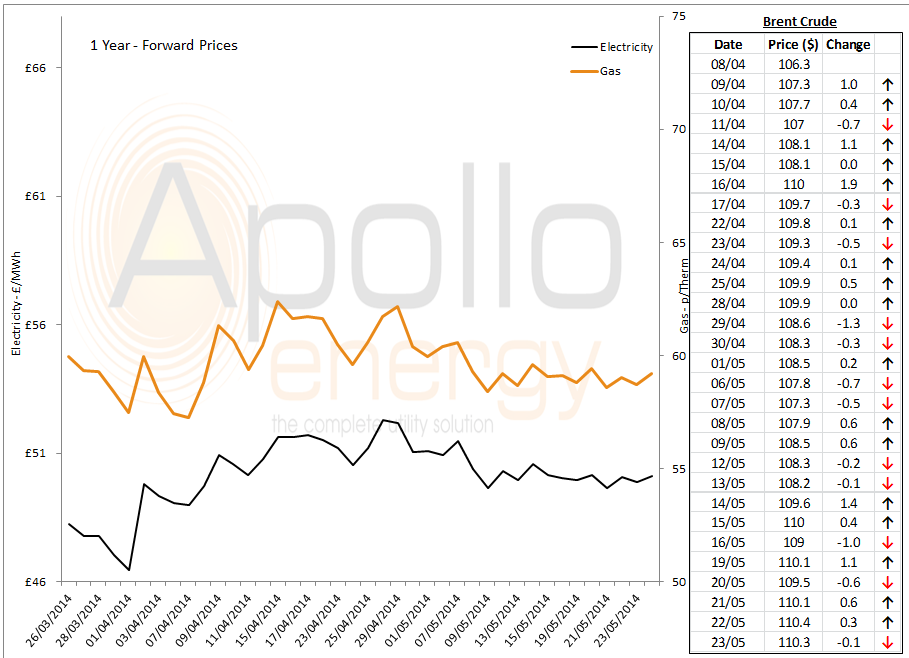 Brent 1st-nearby prices made a slight gain during yesterday's session and opened up at around $110.4 this morning. WTI is also practically unchanged and currently trades at $104/b with influence coming from Libya and Ukraine once again.