Spot power prices have been dictated by recent industrial changes, with the new flow-based market coupling mechanism introduced on Wednesday which continued to offer support over the weekend. Power flows across Europe are generally healthy this morning with wind generation also forecast to improve. Gas prices decreased on Friday on the back of weaker gas demand, with the bank holiday resulting in an extra day of low industrial consumption. Prices are slightly bullish this morning as temperatures remain below the seasonal norm, while Norwegian flows are still restricted due to maintenance. Today's prices can also be found in an easy to read table on our 'current UK energy price' page.

Gas contracts closed at a discount on Friday as healthy supply levels helped to weigh on near-curve prices. Meanwhile, the UK gas system was long for most of the day due to higher LNG send-outs from the South Hook terminal. However, the losses were slightly restricted by a stronger Euro and demand levels which were above the seasonal norm. Movement on the power curve was mixed on Friday as the front-month contract halted its losses after a bearish week. Seasonal contracts also displayed little movement as trading was quiet ahead of the bank holiday weekend.

Stronger demand has supported the prompt this morning but overall movement is minimal with fundamentals generally unchanged from Friday. Supply levels are comfortable across Europe, helped by a healthy LNG outlook, although maintenance in Norway has restricted flows into the UK. Temperatures are expected to remain below average tomorrow which has resulted in a higher demand forecast and has supported the Day-Ahead contract. Warmer weather is expected to return to the UK at the start of the month and this has helped to cap some of the gains further along the curve.

Market close data has revealed that the 1-year forward price for commercial gas recorded a small gain, while commercial electricity decreased - closing at 45.99ppt and £44.14/MWh, respectively. This can be seen in the graph below. 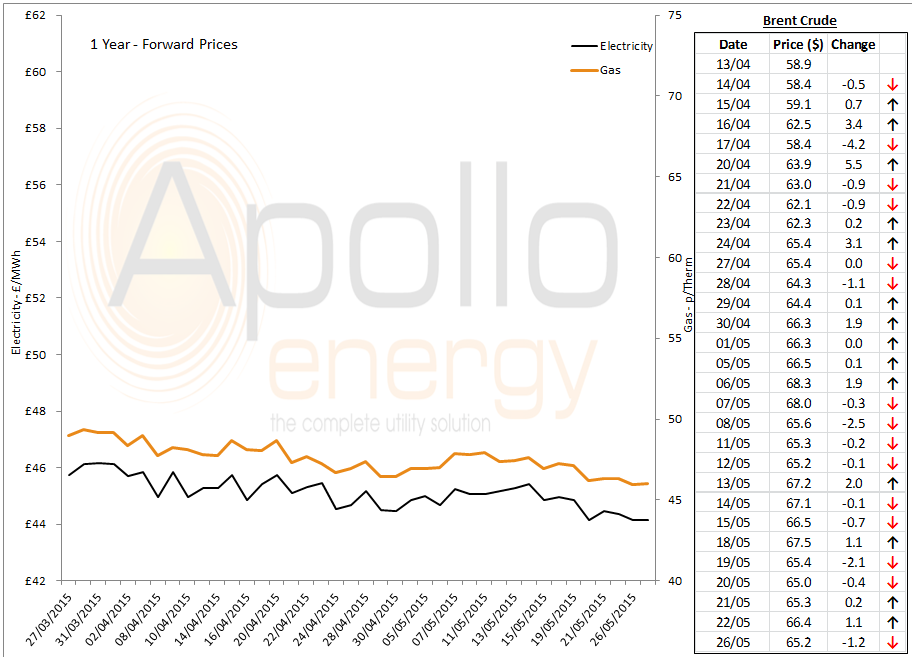 Brent 1st-nearby prices have shown little movement from Friday's closing price, when they settled just above $65/b. Fundamentals are generally unchanged and traders have taken direction from global over-supply.