Spot power prices have climbed higher on the back of weaker generation levels, with numerous outages occurring at coal facilities in Holland and wind production still reduced. An upward revision in temperatures has provided some bearish pressure which has limited some gains. Gas prices climbed higher with direction coming from a report in Holland which hints at a potential 30mcm cap in production at the Groningen field. The threat of reduced production in Holland continues to push prices higher this morning, despite bearish fundamentals. Today's prices can also be found in an easy to read table on our 'current UK energy price' page.

Gas prices ticked higher on Monday due to rumours of a potential production cut at the Dutch Groningen field. Meanwhile, maintenance at the Norwegian Kollsnes facility has been cancelled for the time being which prevented some upward movement. The gains displayed by gas helped to push power contracts higher yesterday, however, the price increases displayed on the power curve were less prominent than those shown by gas; with Front-Month adding £0.60/MWh to its price and Q3-15 rising by £0.50/MWh.

The potential 3mcm drop in production at the Groningen field continues to support the gas market this morning and further gains have been recorded. A warmer weather outlook and healthy supply in the UK failed to have much effect on prices this morning. Power prices have moved higher as a result of stronger gas and a drop in overall generation. Day-Ahead power moved £1.25/MWh higher due to weak wind generation, while Front-Month posted a gain of £1/MWh.

Market close data has revealed that the 1-year forward price for both commercial gas & commercial electricity increased - closing at 46.50ppt and £44.88/MWh, respectively. This can be seen in the graph below. 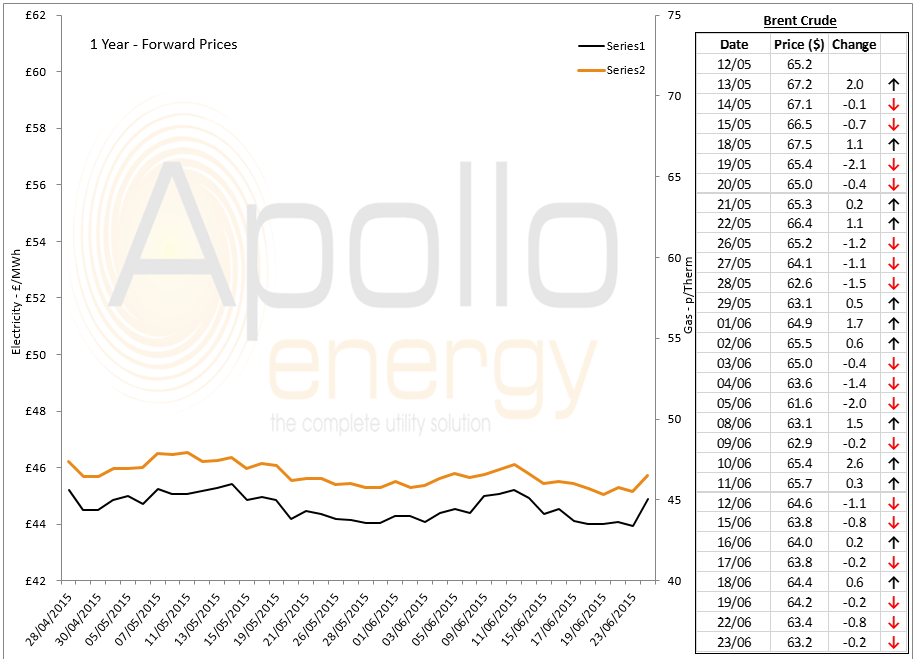 Brent 1st-nearby prices displayed mixed movement during Monday's session and trade at around $63.2/b this morning. The Greek financial crisis has been given a more positive outlook following proposal talks but on-going negotiations in Vienna regarding the Iranian nuclear programme remains a bullish factor.