UK Spot power prices made gains on Tuesday following forecasts for reduced wind generation today - down 5.2GW from yesterday. Temperatures on the continent remain several degrees above seasonal averages though are expected to reduce enough tomorrow for the French nuclear reactors to come back online.

NBP spot prices made further gains on Tuesday due to UK systems remaining significantly under-supplied on the back of the Norwegian and North Morecambe unplanned outages. Gas demand decreased slightly yesterday but storage injections were up so losses were limited.

UK gas prices continued to increase throughout yesterday's session due to the restricted UK supply and increased storage demands. Flows from the Barrow terminal had completely halted yesterday but picked up again towards the end of the session to 2mcm. Centrica's storage facility has received approval to increase capacity by 412mcm.

The UK's Front Winter power contract saw its lowest price since October 2010 yesterday morning after Brent Crude fell to a 14 week low. The curve recovered some value, especially on seasonal contracts, in response to rising NBP prices in the afternoon. Forecasts for above average temperatures at the start of August helped support Front-Month contracts yesterday.

The majority of the UK gas curve followed a downward trend, with Day-Ahead opening 0.25ppt down from Tuesday. Supply tightness has been eased slightly as Norwegian and St-Fergus terminal flows increased this morning. Bearish pressure is expected across the curve today.

Day Ahead power contracts opened at a £1.20/MWh loss this morning following forecasts of lower temperatures for tomorrow helping to ease concerns over supply restrictions. Further out on the curve, the depreciation of Pound against the Euro coupled with reduced pressure from carbon prices saw contracts shed value. This bearish sentiment is expected to continue throughout the day.

Market close data has revealed that the 1-year forward price for commercial gas increased whilst commercial electricity remained steady - closing at 44.03ppt and £43.25/MWh, respectively. This can be seen in the graph below. 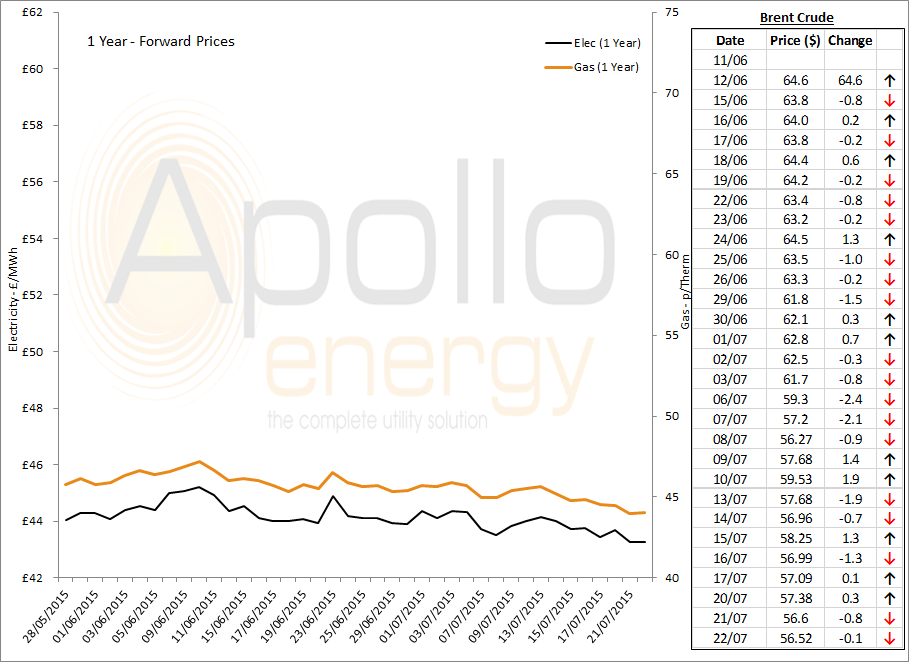 Brent Crude remained around the $56-58/b mark again this morning, with the outlook expected to be slightly bearish for today's session. An increase in US crude oil stocks coupled with the easing off of the dollar restricted further losses yesterday.