UK Spot power prices retreated on Wednesday as temperatures on the continent reduced to 1 to 2 degrees above average allowing some nuclear power plants to partially return with the caveat of capacity limitations. Spot prices are also supported by the return of a German nuclear reactor today and an expected increase in net exports from the Netherlands on the back an unnamed Norwegian gas field returning to the system today.

NBP spot prices were push down slightly on Wednesday supported by expectations of an increase in Norwegian supply as field maintenance comes to an end. The impact of an unplanned outage at the Segal pipeline was reported to be lower than expected at 1.4p/th, adding to the already bearish pressure on the NBP day ahead prices.

UK gas prices decreased throughout yesterday's session as an unnamed Norwegian gas field is expected to return to the system today adding 51mcm of capacity back online. This downward trend is supported further by the national Grid reporting an overall increase of 447mcm from Monday to Tuesday, 412mcm of which comes from Centrica's storage facility after receiving approval to increase capacity.

The UK gas curve continued on its downward trend this morning, supported, as expected by the sharp increase in supply from an unnamed Norwegian Gas field returning to the system. This bearish pressure is supported further by a 25mcm/day jump in flow from Langeled this morning leaving the UK system oversupplied.

Day Ahead power contracts opened at a £0.25/MWh increase this morning, however, the outlook through the day is bearish with lower clean fuel costs expected on the back of the reductions seen in the gas market.

Market close data has revealed that the 1-year forward price for both commercial gas and commercial electricity decreased slightly - closing at 43.50ppt and £42.98/MWh, respectively. This can be seen in the graph below. 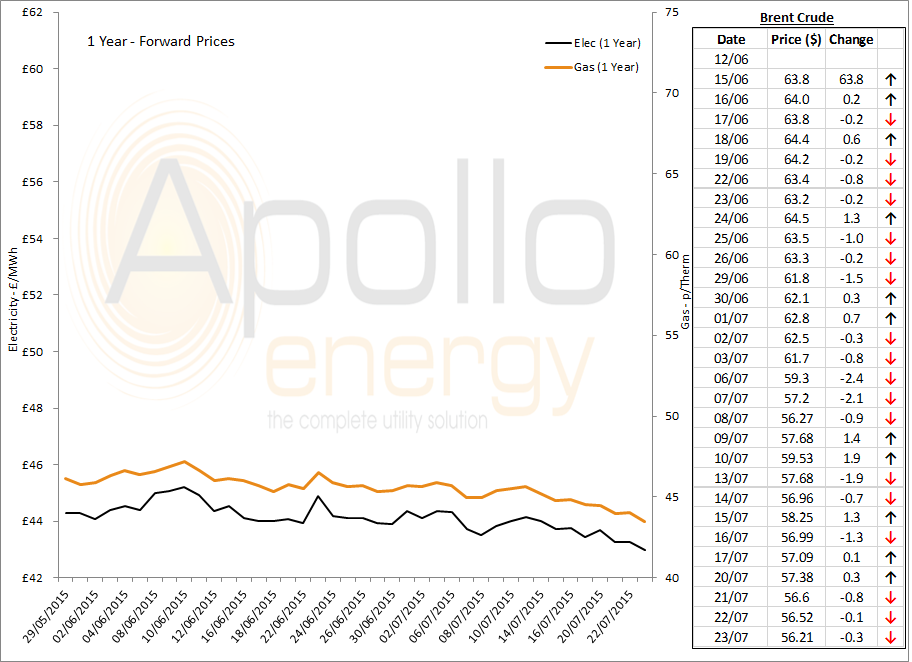 Brent Crude prices continued on its light but clear -30cents/trend seen over the last 8 sessions to settle at $56.21/b with the outlook remaining bearish for today's session. An increase in US crude oil stocks were confirmed at +2.5Mb yesterday.