Spot power prices are on a steady rise following an increase in demand and inconsistent renewable production. Today fuel prices are set to rise and power prices are expected to increase further as a result. European markets were closed yesterday due to the bank holiday but fundamentals for gas are generally bearish this morning, which has helped to limit any gains. However, the situation in Ukraine remains the main driver of prices and a further increase is expected. Today's prices can also be found in an easy to read table on our 'current UK energy price' page.

Gas prices moved higher on Friday following an escalation in Ukrainian tensions and a colder weather forecast. September-14 fell to 42.25ppt and was the contract most affected by the situation in Eastern Europe. Meanwhile, gas flows via the BBL pipeline fell to 0mcm following a shutdown which helped Day-Ahead add 1ppt to its price. BBL is only expected to return on the 30th of August and imports into the UK will remain low until then. Day-Ahead power increased as nuclear generation was expected to weaken over the course of this week; contracts also took direction from Ukraine and stronger gas. Further along the curve most seasonal contracts displayed a loss with Winter-15 falling to £55.10/MWh and Winter-16 closing at £55.55/MWh.

Further gains were observed on the gas curve this morning with Day-Ahead rallying 1.50ppt higher. The UK gas system opened 12mcm short with extra storage injections required to offset lower LNG flows. Slightly warmer weather over the weekend has had little impact on near-curve prices as September-14 rose by 0.90ppt. Power prices followed their gas counterparts with Day-Ahead opening at a £1.20/MWh premium. Contracts rose by as much as £0.60/MWh with Ukraine providing on-going bullish pressure. The weekend also saw a number of nuclear power units go offline, while coal-fired generation also dropped.

Market close data has revealed that the 1-year forward price for both commercial gas & commercial electricity climbed higher - closing at 58.28ppt and £50.33/MWh,respectively. This can be seen in the graph below. 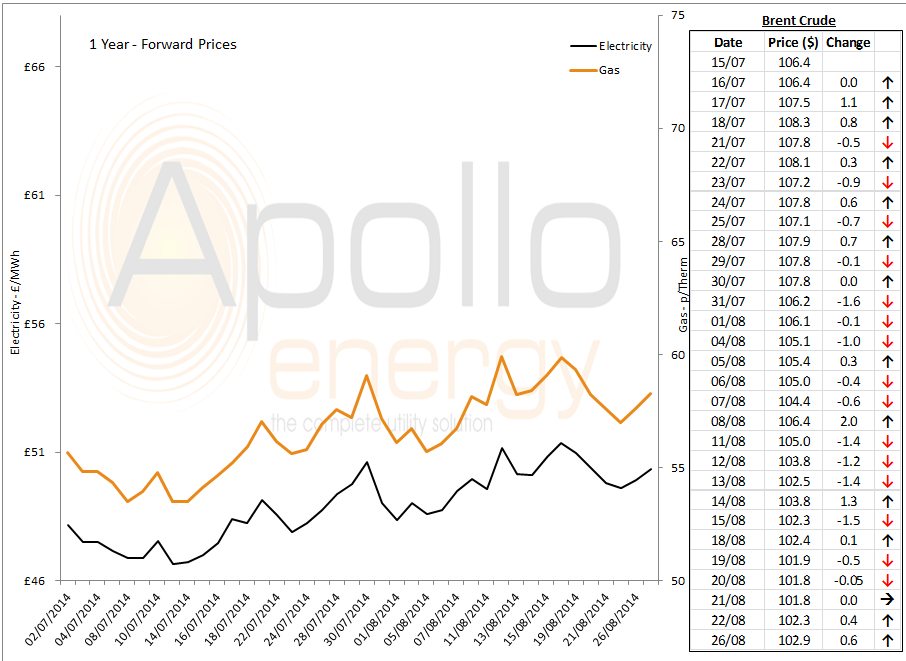 Brent 1st-nearby prices moved higher whereas WTI recorded a small loss, although prices have not displayed much movement since Friday; Brent currently trades at $102.9/b.