Spot prices are expected to show more downward movement than upward in the coming days on the back of improved nuclear and wind generation as well as mild temperatures until the middle of next week at least. An increase in BBL flows helped towards a comfortable UK gas system yesterday which helped NBP prices make a loss. UK LDZ demand is expected to increase slightly today but remains below average while BBL flows are expected to weaken which should see November-13 prices rise. Today's prices can also be found in an easy to read table on our 'current UK energy price' page.

Day-Ahead gas added 0.20ppt to its price yesterday as demand levels increased and imports were rather low. Seasonal contracts fell slightly as the British Pound strengthened against the Euro while Brent held firm thanks to US inventory levels. The power curve saw mixed movement with far-curve contracts closing at a discount as a result of weaker carbon allowance prices although higher APi2 coal prices restricted the losses. Day-Ahead increased by £1.25/MWh as wind generation failed to achieve the high levels it was expected to.

Gas contracts moved higher this morning with Day-Ahead registering a 0.60ppt price increase as the system opened 24mcm short despite Langeled flows ramping up by 19mcm. Demand is expected to grow tomorrow and is the main driver of prices today while storage levels are just under 95%. Power contracts mirrored gas somewhat and went up with Day-ahead displaying the biggest rise of £1.55/MWh. Front-Month climbed £0.25/MWh higher as a revised weather forecast has predicted slightly colder temperatures, climbing APi2 coal prices was also a factor for the bullish tension.

Market close data has revealed that the 1-year forward price for both commercial gas & commercial electricity went up - closing at 66.85ppt and £52.38/MWh, respectively. This can be seen in the graph below. 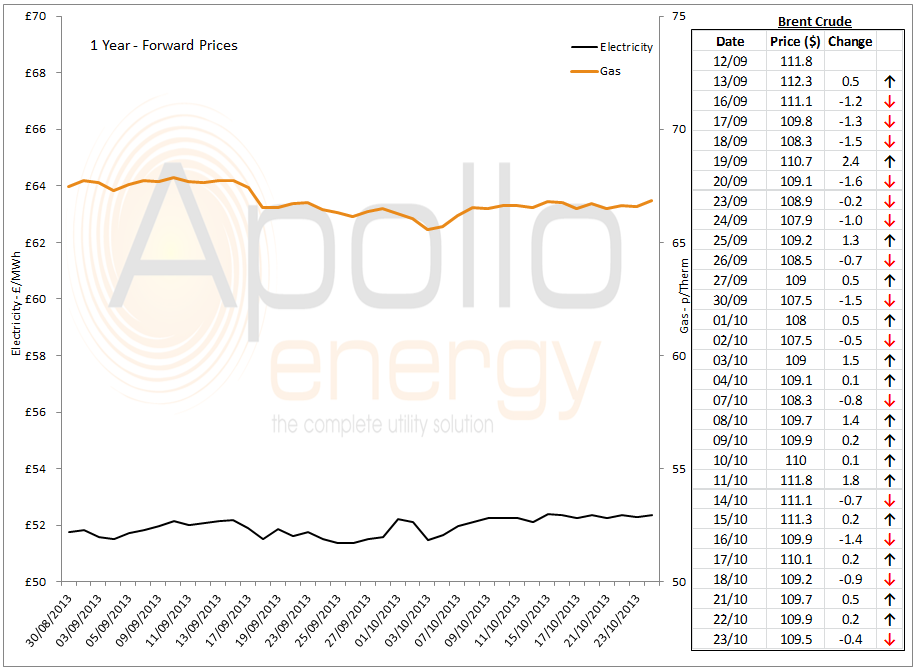 Brent 1st-nearby prices held firm yesterday and hovered around the $110/b mark showing almost no change at the end of the session. However this morning saw prices drop to $109.6/b and the Brent/WTI spread now stands at -$12/b, the largest gap since the middle of April.